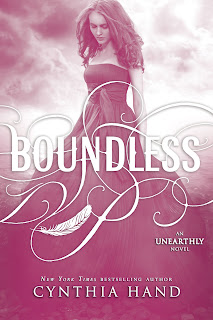 I actually finished this book earlier this week, but I needed time to calm down from the disappointment before I visited this world again. As for plot and pacing, the book was amazing. I severely enjoyed the book up to the end. As the end got closed though, I started shaking and says 'No, no, no, NO!' It was not pretty. In order to get the book out of my sight, I had my mom read it. Apparently, I was then walking around my room all day muttering like a madwoman and talking to myself. You see what books do to me! I literally cried after I finished the book. Supposedly, the beginning and end of a book are the hardest to write. That could be the reason why I didn't enjoy the ending of Boundless as much as I should have.

The main character is Clara. I love her character. I love how she's written and she's so well done. I question some of her choices, but that what makes her feel real. After all, nobody's perfect. Her best friend Angela on the other hand, I have problems with. Angela is nice and sweet and all that, but she's an idiot. I really really REALLY want to smack her sometimes. Seriously. She. Acts. So. Stupid. And it's not just normal teen stupid either. It's REALLY stupid. Some... interesting events take place with her in Boundless and I just want to walk up to her and say, "Well what did you think would happen?" Let's just say, this book is NOT for young readers. Then there's the Christian/Tucker love triangle. I want to shake Clara and say "Go for Christian Clara! Christian!" But she just doesn't listen to me! She just keeps agonizing over which boy she should be with. Sigh, well, you'll find out who it is in the end.

Here's what I said to my parents after finishing the book, "A book doesn't have to be wrapped in a nice, big, bright bow or anything, but it needs to be a little bow or a knot. That, or it can have a bunch of loose string everywhere that's wrapped up in a spinoff. But all Boundless has is a bit of ribbon lightly draped around it, or one of those fake bows that stick on. I need a spinoff, or something! It can't end that way." Hence, I've decided to petition Cynthia Hand for a spinoff of the Unearthly series until she complies. I need to know everyone's fate! The book was really building up to something that never really happens. There's a bit more lead-up to it, but nothing more. What am I supposed to do when people are still heartbroken or unsure at the end? It's just not right. But, the book really was good quality and I've done a lot of complaining. I still love Cynthia Hand as an author and enjoy her books. If she ever writes more books (preferably a spinoff of the Unearthly trilogy) I'll read them. So, because the book was still good, but I wasn't satisfied, Boundless gets four stars.

The past few years held more surprises than part-angel Clara Gardner ever could have anticipated. Yet through the dizzying high of first love to the agonizing low of losing someone close to her, the one thing she could no longer deny was that she was never meant to have a normal life.

Since discovering the special role she plays among the other angel-bloods, Clara has been determined to protect Tucker Avery from the evil that follows her . . . even if it means breaking both their hearts. Leaving town seemed like the best option, so she's headed back to California—and so is Christian Prescott, the irresistible boy from the vision that started her on this journey in the first place.

As Clara makes her way in a world that is frighteningly new, she discovers that the fallen angel who attacked her is watching her every move. And he's not the only one. . . . With the battle against the Black Wings looming, Clara knows she must finally fulfill her destiny. But it won't come without sacrifices and betrayal.

In the riveting finale of the Unearthly series, Clara must choose her fate once and for all.