Today, I have an interview with the amazing Aimee L Salter! In short, Breakable is about a girl named Stacy who can see and talk to her future self in the mirror. Even better, the entire story is her telling her story to a doctor at a Psychiatry Ward! Read on for the interview!

Isabel: When writing, what inspires you and what distracts you?

Aimee: Hmmm, that’s an interesting question. If I’m already “in flow” so to speak, then using my music playlist for whatever story I’m working on is always inspiring. If I haven’t started writing, then anything that makes me feel (movies, music, television shows with a similar tone to my book, etc) can move my creative juices and make me itch to get to the keyboard. Once or twice I’ve even been ignited by the news…

Distractions are easy: People talking to me. I can work with loud music going on, even the tv (sometimes). But people talking nearby, or talking to me is really hard. That’s what makes writing tricky as a mother. But it’s just life. I’ve learned to either stay focused, or to “give up” and carve out some quiet time later.

Isabel: What contributed to the idea for Breakable?

Aimee: The original premise came to me after reading the website www.dearteenme.com in which authors write letters to their teen selves. I ended up having a conversation in my head with my sixteen year old self, and I realized how engaging the idea was.

Did I mention feelings are very inspiring for me? *Grin*

Isabel: What can readers expect from Breakable and what might surprise them?

Aimee: Well, I’ve been with this story for over two years now, and have been reviewed several times at this point. I’ve been surprised by what has consistently “popped out” for readers, as opposed to what comes to the surface for me.

According to those who’ve read it recently, you’ll find it a fairly intense read emotionally, especially if you can empathize with someone who was bullied in high school, or being targeted unfairly by peers at that age.

Surprises? Well, there is one twist at the end that will hopefully take you off-guard, but I couldn’t tell you what it was without ruining it!

Isabel: Are there any necessary things to your writing?

There’s really two answers to that: When I’m not under deadline, the answer is coffee, good music (or silence), and a good night’s sleep.

When I have a deadline, I am able to push through. But it’s always a stressful time. I never feel as comfortable about what I’m producing when it’s “pulled out” under pressure. But I have learned that, if necessarily, I can write in pretty much any circumstances (with the exception of severe drowsiness. Sitting at a computer when I’m drowsy is a great way to get a nap).

Isabel: Do you plan on writing a sequel to Breakable? If not, what else might you be planning?

Aimee: That’s a really tricky question because there is a sequel story to Breakable, but it’s not one I’m sure readers will want to read. So I’m undecided as to whether or not I’ll finish it.

I’m the kind of writer who always has several stories on the go at once. Right now I’m trying to decide between two or three, as to which should get my full attention for my next release. I’ve created a reader survey on my blog [LINK: http://aimeelsalterbooks.blogspot.com/p/reader-survey_28.html] Anyone who completes the brief survey can enter to win a chance to name a character in my next book. To enter, just read the three brief book descriptions and tick boxes on how much they appeal. Then give me your email address or twitter handle in the final box!

I’ll announce the winner after Christmas.

Isabel: What inspired you to be a writer?

Aimee: I was a big reader before I was a writer. I’m not sure at which point I started wanting to write my own stories, but by age ten I was telling people I wanted to be a novelist (and being told I’d better go into journalism, because there was no way a novelist could make a living). I really got dedicated to writing when I was about thirteen, and pursued it throughout high school and sometimes during college. But it wasn’t until I was in my late twenties that I actually made the commitment to work towards becoming a professional writer. And I didn’t move on that until 2009 when I was at home with my son (who was two at the time).

It took me a long time to build up the courage to step out and say I was a writer. Now I’m determined never to look back!

Isabel: Do you think readers can relate to any of your characters? Which one do you relate to the most?

Aimee: I always hope readers can relate to my characters – especially the protagonist. My goal in every story I write is to put the reader “in their skin”.

I’m inside all my characters heads, so I have a great deal of empathy for all of them. But there’s no doubt that the character who’s drawn the most from my own high school experience is the protagonist, Stacy. I’ll emphasize: her story is different to mine (she’s also a different kind of person to me). But I used things that happened to me and to friends in high school to fuel the inspiration for her story.

Isabel: What's your favorite thing about writing? Your least favorite?

Aimee: My favorite thing about writing is that moment when you’re really living the story. For each book I get to build a world and develop characters. But there’s always a point in the story where the reader’s learned enough that I can stop “informing” and just walk through the main character’s life. I love that. I love the moments when I get to live something that the main character has been aching for since the first page – whether it’s that first kiss, or a funny moment, or triumph over the antagonist…it doesn’t really matter. I just love feeling those moments of elation with them.

My least favorite thing is knowing when I’m first writing a story that I’m not going to get it right. It’s frustrating to me that the way my brain works means I have to go back and revise and re-write, revise and re-write several times for each book. It’s always good when the final product works. But the process of getting there – knowing I’m screwing up, especially in the first draft – is incredibly frustrating to me. I want to be perfect first time. I’ve accepted that it can’t be that way. But that doesn’t mean I don’t growl about it, ha!

Isabel: What were some of your favorites books as a child vs now?

Aimee: My favorite books as a kid were Watership Down (a book I still recommend, to young people and adults alike) and a series of books whose titles I can’t remember, but they were written by the author of the Sweet Valley High series, and about an initially awful girl named Caitlin. Awesome character development in those books. They always stuck with me.

Now I love books that make me feel. Current favorite is The Sea of Tranquility by Katja Millay. But right now I’m on a clever-literary-chilling bender. Favorites like that are The Basic Eight, by Daniel Handler, and The Secret History, by Donna Tartt. I love it when I have to use the dictionary function on my Kindle and the main character outsmarts me.

If you’re looking for book recommendations, I have a link on my website that gives bookshelves and covers of my top 14 books in YA and adult genres [LINK: http://aimeelsalterbooks.blogspot.com/p/reader-recommendations.html ] I’ll adjust those as I find new favorites.

Isabel: Any advice for aspiring authors?

Aimee: Yes, but not necessarily advice they want to hear, ha!
When I first started writing I got some really good advice from a very experienced agent, and I still think it’s the best advice I’ve ever received:

You can’t truly measure your own skill as a writer unless you let people who don’t know you and don’t love you read your books. And when you let strangers read your book(s), they’ll tell you what’s wrong with them. Thus, you have to develop a thick-skin for criticism.

It sounds awful, but the truth is, when you take that advice you get your heart broken and your confidence knocked the first dozen times or so. Then you start seeing how much better your stories are when you take people’s advice, and you start looking forward to criticism because you know it’s going to make your book better.

I honestly can’t think of better advice to give. If you want to be good at writing (not just good at your own stories), you have to be willing to let people tear your work apart. Then, when you put it back together, it’s better. And you love it even more. 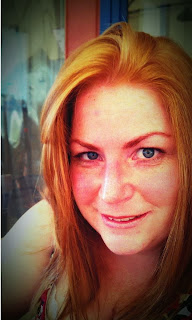 Aimee L. Salter is a Pacific North-Westerner who spent much of her young (and not-so-young) life in New Zealand. After picking up a Kiwi husband and son, she’s recently returned to Oregon.

She writes novels for teens and the occasional adult who, like herself, are still in touch with their inner-high schooler.

Aimee is the author behind Seeking the Write Life, a popular blog for writers.

Aimee’s debut novel, Breakable, releases November 4th for Kindle, Nook and in paperback. You can add Breakable to your to-read list on Goodreads at http://www.goodreads.com/book/show/18377058-breakable. 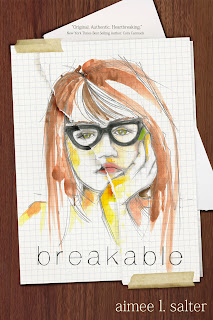 If you can’t trust yourself, who can you trust?

When seventeen-year-old Stacy looks in the mirror she can see and talk to her future self. “Older Me” has been Stacy's secret support through the ongoing battle with their neurotic mother, relentless bullying at school, and dealing with her hopeless love for her best friend, Mark.

Then Stacy discovers Older Me is a liar.

Still reeling from that betrayal, Stacy is targeted again by her most persistent tormentor. Only this time, he's used her own artwork to humiliate her - and threaten her last chance with Mark.