Double Review: The Raven Boys and The Dream Thieves by Maggie Stiefvater

I've heard a lot about these books and how amazing they are. So, one day, I decided to pick up the first one and see if it lived up to the hype. It wasn't as good as I'd been told it was, but it was better than I expected. Which is always a good thing. Both book one and book two I had trouble getting in to. They would start off slow, but then about halfway through, they'd pick up and I wouldn't be able to put it down. Skimming became a very close friend of mine, as I struggled through POVs that I didn't enjoy. And yes, there were

The main character (more or less) is Blue. She is pretty awesome. She lives with a bajillion aunts and cousins, all female. And of course, her mother. Her house is a crazy, fun, loving environment that any kid would want to grow up in. The thing is, everyone in her family is physic. Except Blue. But what she doesn't have in magical powers, Blue makes up for in complete and utter spunk. She is kick butt with words, and doesn't back down. She the POV I most enjoyed reading from, but the reader got so little of it with the amount of others. Blue also has a secret, all her life, she's been told that if she kisses her true love, he'll die.

Another character I really enjoy is Gansey. He character is Blue's true love, but she's in denial about it. She doesn't want to like him. Instead, she wants to like Gansey's friend, Adam. Which might have had me screaming at the book. Seriously, we'd be in the middle of lunch at school, and I'd just burst out "Die Adam, die! You can just, spontaneously combust or something!" I'm pretty sure I said those exact words. There's also Ronan, another one of the gang. I don't mind his character, but I didn't need so much of his POV either. We also get a lot of time with a man known as The Gray Man in book two. His POVs is where I had to do the most skimming. I simply did not find him interesting and could not sympathize with his problems. Also, I really don't want to see into Blue's mother's love life. 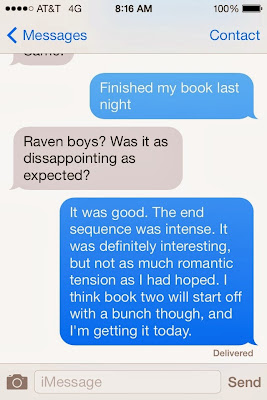 That right there is my review of book one via text to a friend. Not much more than that is needed. The book was well written. It had way too much description, but the writing itself was well done. Not every aspect made sense, though that might be partially because of my skimming. I have to say, after the end of book two, I NEED book three! I looked it up, and how does it not have a release date yet? It comes out next year! I want the date, cover, and synopsis now! I'm really hoping the tension between Blue and Gansey will rise in the next book. The one relationship that I really want that probably won't happen? Ronan and Gansey. Why? Read book two and you'll see. The books overall were really interesting. I give them four stars! *sits back and stalks computer for updates on book three*

After a tumultuous past as a history major, calligraphy instructor, wedding musician, technical editor, and equestrian artist, I’m now a full-time writer living in the middle of nowhere, Virginia, with my charmingly straight-laced husband, two kids, four neurotic dogs who fart recreationally, and a 1973 Camaro named Loki.

Every year, Blue Sargent stands next to her clairvoyant mother as the soon-to-be dead walk past. Blue never sees them--until this year, when a boy emerges from the dark and speaks to her.

His name is Gansey, a rich student at Aglionby, the local private school. Blue has a policy of staying away from Aglionby boys. Known as Raven Boys, they can only mean trouble.

But Blue is drawn to Gansey, in a way she can't entirely explain. He is on a quest that has encompassed three other Raven Boys: Adam, the scholarship student who resents the privilege around him; Ronan, the fierce soul whose emotions range from anger to despair; and Noah, the taciturn watcher who notices many things but says very little.

For as long as she can remember, Blue has been warned that she will cause her true love to die. She doesn't believe in true love, and never thought this would be a problem. But as her life becomes caught up in the strange and sinister world of the Raven Boys, she's not so sure anymore.

One secret: Ronan can bring things out of his dreams.

And sometimes he's not the only one who wants those things.

Ronan is one of the raven boys-a group of friends, practically brothers, searching for a dead king named Glendower, who they think is hidden somewhere in the hills by their elite private school, Aglionby Academy. The path to Glendower has long lived as an undercurrent beneath town. But now, like Ronan's secrets, it is beginning to rise to the surface-changing everything in it's wake.