Her Dark Curiosity by Megan Shepherd 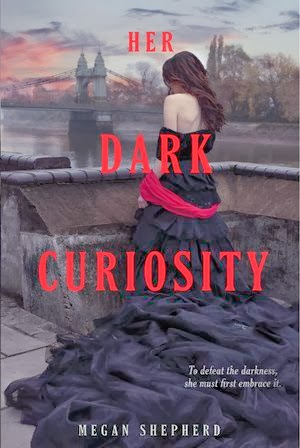 Okay, I admite that I didn't write up a full review of The Madman's Daughter (book one), so if you missed it, here's my short review from the January Wrap-Up post.

This book was creepy, interesting, and a whole lot more of creepy. Plus, it takes place (partially) in Victorian London. It's a retelling of a classic story, and the sequel, which came out on Tuesday, is as well!

I had actually preordered this book, but it had never arrived at my local indie store because they accidentally ordered the UK edition! I had needed by Thursday night because, guess what, I was going to a signing in which one of the authors was Megan Shepherd! The other three were Robin Constantine, Megan Miranda, and Kasie West (all of whom I love). So, I ended buying the book at the event. Story time, the event was AMAZING! There were two different signings in my area and after the first one, I REALLY wanted to go to the second one, but I was busy the next evening. The authors actually recognized me from twitter (so cool!) and we talked before the even started. I got a total of twelve books signed and will be giving three of them away soon alone with some awesome swag! Story time over.

I was intrigued with The Madman's Daughter, but Her Dark Curiosity really pulled me into Juliets' world. It was so creepy and amazing. This was a retelling of Dr. Jekyll and Mr. Hyde. The main character Juliet really struggles with right and wrong in this book. She sometimes worries she's going mad and wonders whether science is truly good or evil. I love Juliet, I really do, but I had one problem. So, Juliet is into Montgomery, even though, for the longest time, he wasn't into her. Edward likes Juliet and though Juliet returns his affections, she can't admit it, even to herself. Don't get me wrong, I like Montgomery, he's nice, but I will find a way to kill him if I have to because he is currently in the way of my ship! I really like Edward and Juliet together because, even if they don't bring out the best in each other, they bring out the strongest. Montgomery doesn't fully realize the extent of Juliet, constantly underestimates her, and we all know he's lying to her!

The plot was incredibly fast paced and had a million twists and turns. It was one of the few books that I could not predict what was going to happen. There were betrayals left and right, and constant danger. I would not have wanted to be in the characters' shoes. Victorian London is often romanticized in a lot of novels, but this gives you the real deal. The end totally took me by surprise and now I'm dying for the final book! The good, the bad, and the ugly. You will be drawn into the madness. I give it five stars!

A few tweets to go along with this:


@Tween2TeenBooks It was my favorite of the three to write; I hope readers like it!
— Megan Shepherd (@megan_shepherd) February 22, 2014


@Tween2TeenBooks Well, I can promise that the third book doesn't have a cliffhanger. Everything wraps up…but there are LOTS of twists
— Megan Shepherd (@megan_shepherd) February 22, 2014


@Tween2TeenBooks Some of the twists even took my by surprise!
— Megan Shepherd (@megan_shepherd) February 22, 2014

Months have passed since Juliet Moreau returned to civilization after escaping her father's island—and the secrets she left behind. Now, back in London once more, she is rebuilding the life she once knew and trying to forget Dr. Moreau’s horrific legacy—though someone, or something, hasn’t forgotten her.

As people close to Juliet fall victim one by one to a murderer who leaves a macabre calling card of three clawlike slashes, Juliet fears one of her father’s creations may have also escaped the island. She is determined to find the killer before Scotland Yard does, though it means awakening sides of herself she had thought long banished, and facing loves from her past she never expected to see again.

As Juliet strives to stop a killer while searching for a serum to cure her own worsening illness, she finds herself once more in the midst of a world of scandal and danger. Her heart torn in two, past bubbling to the surface, life threatened by an obsessive killer—Juliet will be lucky to escape alive.

With inspiration from Robert Louis Stevenson’s The Strange Case of Dr. Jekyll and Mr. Hyde, this is a tantalizing mystery about the hidden natures of those we love and how far we’ll go to save them from themselves.