Interview: Alison Kemper Author of Donna of the Dead

Please welcome Alison Kemper, author of the new release, Donna of the Dead! I'm reading the book now and am loving it! Read on for an exclusive interview with the author! 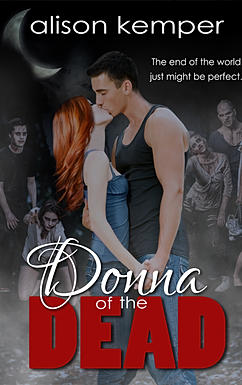 1. What are some things that served as inspiration for Donna of the Dead?


I had this crazy dream where I was stuck in a bank surrounded by zombies. Some of the stuff from that dream ended up in the novel. The boy from the dream turned into Liam. I probably shouldn't say more than that--don't want to give anything away!

2. What would you do if faced with the zombie apocalypse?

Ack. I'd probably run around my house frantically looking for something to use as a weapon. I'd end up battling zombies with shish kebab skewers and an umbrella.

3. What are some of your favorite zombie movies/TV shows, books?

Oh, wow! I like this question. You ask good questions! I've watched Walking Dead since it first started and love it. I'm also a big Game of Thrones fan--which I think is ramping up for some zombie action with the White Walkers. 28 Days Later, Zombieland and Shaun of the Dead are probably my favorite zombie movies. Forest of Hands and Teeth is such a classic YA zombie novel. I really enjoyed that one. Oh, and World War Z! Great book and movie--even though they are nothing alike.

4. What is one thing that you can't write without?

My dog. I got him from a shelter a few years back and he follows me around like a shadow. When I write he has to sit beside me. Or in my lap. Which makes writing difficult since he's rather large and usually falls asleep and snores.

5. What do you like to do when not writing?

I love to travel. And hike. And hike wherever I travel.

6. What inspired you to be a writer and when did you start writing?

A couple years back, I'd been doing a lot of hiking and injured my foot. The doctor told me to stay off it for two months. I knew I'd go crazy if I didn't have something to keep me occupied, so I decided to try writing a novel. The novel turned into Donna of the Dead!

7. What do you feel is the most important aspect of a story?

Excitement. I want people to keep turning pages to find out what happens.

8. What would you do if you were hearing voices like Donna is in the book?

Another great question. I'd probably have the same reaction she does; I'd think I was having some sort of mental issue. I'd be scared to tell anyone, even though that's probably the best course of action.

9. Describe Donna of the Dead in five words.

10. What advice do you have for aspiring authors?

You have to spend a lot of time in the world you create, so make sure you write something you enjoy.

Even if other people tell you that the genre is too crowded and your book will never sell. There's a chance they might be wrong. :) 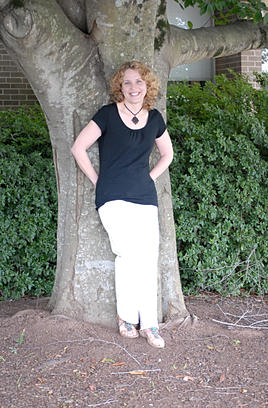 Alison Kemper grew up in South Florida, the only girl on a street with eleven boys. She spent most of her childhood paddling a canoe through neighborhood canals and looking for adventure. She usually found it. Sometimes the police were involved. And large dogs. And one time, a very territorial snake. Now that she’s grown up, she lives in North Carolina and writes books. The books often include girls having adventures. With boys. Cute boys. And cute dogs too. But no cute snakes. Never cute snakes.
Her debut novel, Donna of the Dead, will be published by Entangled Teen in 2014 and followed by two companion books in the series. She loves to meet new people and talk books, so send her a friend request or connect with her on Twitter and Instagram.