This week's pick is Toxic Heart by Theo Lawrence! I read Mystic City back when it came out in October of 2012. 2012! Toxic Heart was originally set to be released last July, but that didn't happen. Mystic City was REALLY good, and after waiting for such a long time, I am ecstatic for this book! And let me tell you, I won't just be kinda disappointed if the book stinks, I *might* be end-of-the-world disappointed. Because when you've been waiting for a YEAR AND A HALF you want a good book. That said, it has an amazing premise, and I can't wait to read it! 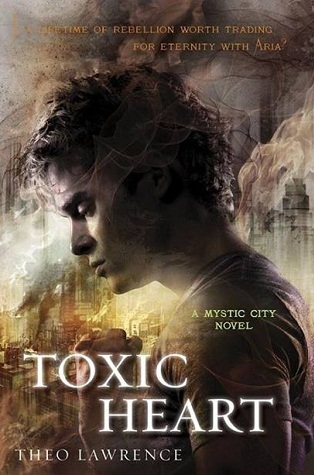 A city in flames. A trust betrayed. A perfect love destroyed.

Has Aria lost Hunter, her one true love?

Ever since rebellion broke out in Mystic City, pitting the ruling elite against the magic-wielding mystics, Aria has barely seen her boyfriend. Not surprising, since Hunter is the leader of the mystic uprising, and he'll do whatever it takes to win freedom for his people—even if that means using Aria.

But Aria is no one's pawn. She believes she can bring the two warring sides together, save the city, and win back the Hunter she fell in love with.

Before she can play peacemaker, though, Aria will need to find the missing heart of a dead mystic. The heart gives untold powers to whoever possesses it, but finding it means seeking out a fierce enemy whose deepest desire is for Aria to be gone—forever.