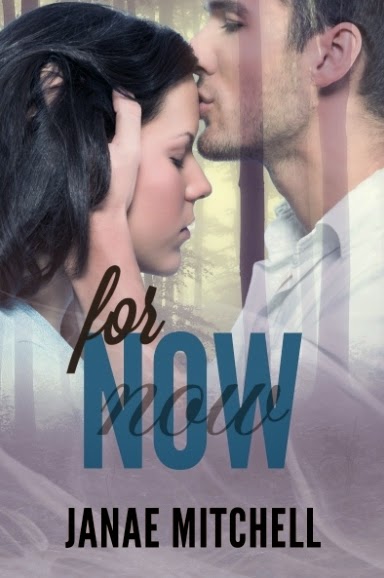 For Now
Book Two in the FOR ALWAYS Series

Malyn Reed has always been able to see spirits, but never thought she would fall in love with one…until she met Beau Brogan.

Even among the spirit world, Beau Brogan is different. He has the ability to interact with the living world in ways that are uncommon for most ghosts, drawing the much unwanted attention of Takers, the inhabitants of the Darkness. When Beau realizes the secrets that are held within the Darkness, he will have to face one of the toughest decisions he has ever made, dead or alive…and his decision could ultimately change everything, for him and Malyn.

Malyn Reed is not only fervently haunted by Beau, but she is also haunted by the decisions he makes, which could make her rethink everything that she has ever believed in. And when a freak accident turns Malyn’s and her best friend, Beth’s, lives upside down, Malyn will have some decisions of her own to make.

"The past is a ghost, the future a dream, and all we ever have is now."

The YA Paranormal Romance series, For Always, takes place in beautiful Dandridge, Tennessee, where history and the present collide, giving birth to the story of Beau Brogan and Malyn Reed. Malyn has been able to see spirits her entire life, but once she learned how to differentiate between the living and the dead, she realized that ignoring the ghosts that she encounters on an almost daily basis makes her life much easier—until her and her grandmother, Nellie, move from Nashville to east Tennessee.Beau Brogan was born and raised in Dandridge, where his family were prominent farmers and owned the local general store. Little did they know that the very same rains that would give them the most bountiful crop season ever would be the same rains that would forever change their lives. When Beau saw that the swelling river had flooded their land and had stolen Thomas, the youngest of the Brogan children, he immediately jumped in to save him. Giving his life to save his little brother is something Beau has never regretted, even though it has left him trapped in a state of living death. For the past one-hundred years, Beau has been alone, invisible to the world that continues to change around him. Unable to leave the place where he died, Beau's once loved home is now a prison that he can't escape. But when Malyn and Nellie move in to his long abandoned house, everything changes... forever.

The big release day for book two in the For Always series is Tuesday, April 15th! To celebrate, I'm hosting a big release party on my facebook page with multiple author & blogger giveaways, so don't miss out!