So, this post will consist of A) the blogger end-of-year survey, B) a book puzzle that I made that you can download! C) a giveaway partway related to the puzzle. Trust me when I say each part is worth it! Also, for the survey, I'm stealing The YA Book Butterfly's outline.

Number of Books I Read: 200
Number of Rereads: I have no idea, I've reread so many books.
Genre I Read the Most Of: Definitely YA paranormal!

Anthology: I have no idea. I believe I've started two this year and haven't finished either of them.
Contemporary: On the Fence by Kasie West, Better Off Friends by Elizabeth Eulberg, and Everything Leads to You by Nina LaCour.
Historical Fiction: The fact that I can't remember if I read any historical books this year.
High Fantasy: Heir of Fire by Sarah J. Maas and Red Queen by Victoria Aveyard
Paranormal: The Queen of Zombie Hearts by Gena Showalter, City of Heavenly Fire by Cassandra Clare, and Sweet Reckoning by Wendy Higgins
Dystopian: Ignite Me by Tahereh Mafi

2. Book You Were Excited About & Thought You Were Going to Love More But Didn't?

Ruin and Rising by Leigh Bardugo was a major disappoint.

Definitely The Winner's Curse by Marie Rutkoski. I really thought I wouldn't enjoy it but ended up loving it!

Either White Hot Kiss by Jennifer L. Armentrout or A Little Something Different by Sandy Hall.

5. Best Series You Started, Sequel, and Series Enders of 2014

6. Favorite Author You Discovered This Year

Kasie West for sure!

7. Best Book From a Genre You Don't Typically Read

The genre I don't typically read is historical and I can't remember any.

8. Most Unputdownable Book of the Year

Either White Hot Kiss by Jennifer L. Armentrout, All That Glows by Ryan Graudin, or Red Queen by Victoria Aveyard.

9. Book You Read This Year That You Are Most Likely to Reread Next Year

All That Glows by Ryan Graudin. Considering I reread it about ten times this year, there's no doubt in my mind.

Celeana Sardothian from Heir of Fire by Sarah J. Maas. Yeah, I can't get her out of my head.

12. Most Beautifully Written Book You Read

Does a reread of The Book Thief by Marcus Zusak count? Seriously, you can open that book to any page and it is beautiful.

13. Most Thought Provoking/Life Changing Book of 2014

Every Day by David Levithan. I hated the end of the book, but it definitely made me thing.

The Lonely Hearts Club by Elizabeth Eulberg. So much fun!

Both are from Ignite Me by Tahereh Mafi, but here they are:

“Words, I think, are such unpredictable creatures.
No gun, no sword, no army or king will ever be more powerful than a sentence. Swords may cut and kill, but words will stab and stay, burying themselves in our bones to become corpses we carry into the future, all the time digging and failing to rip their skeletons from our flesh.”

“And we are quotation marks, inverted and upside down, clinging to one another at the end of this life sentence. Trapped by lives we did not choose.”

17. Book That Shocked You the Most

Anna and Kaiden from Sweet Reckoning! Or Laila and Roth from White Hot Kiss!

19. Favorite Non-Romantic Couple of the Year

Kat and Alice from The Queen of Zombie Hearts! *cries a little bit*

21. Best Book You Read Solely on a Recommendation

Considering that EVERYONE recommended The Winner's Curse by Marie Rutkoski to me, that one!

Rowan from Heir of Fire by Sarah J. Maas. I've read all of her other books, but Rowan is a new character and ROCKS! If he doesn't end up with Celeana, I want him.

Rites of Passage by Joy N. Hensley, Cruel Beauty by Rosamund Hodge, or All That Glows by Ryan Graudin

Do I really need to keep repeating Heir of Fire and Red Queen? :D

We Were Liars by E. Lockhart. There was another book that made me cry, but I kinda hated it.

A Little Something Different by Sandy Hall. A super adorable book told from various different points of view (including a squirrel), but not the main couple.

28. Book That Crushed Your Soul

Not many crushed my soul, but the wait for all the 2015 books sure will! That said, Unhinged by A.G. Howard.

29. Most Unique Book You Read

30. Book That Made Me the Most Mad

The Things You Kiss Goodbye by Leslie Connor. Definitely a good book, but had a, what I felt, unnecessary ending.

So, the other day, I saw a puzzle in a magazine where you use hints to fill in the blank, then use certain letters from the blank to make a word or sentence. So I stayed up until 11:00 the other night putting it together and ended up very happy. So here are the rules!

Print out the sheets (or use in some other form)
Look at the clue for the first fill-in-the-blank
If you can't figure it out, go to the internet for help! (But do try to figure it out yourself first)
Repeat for each fill-in-the-blank
Once you've filled them all in, take the letters that are above numbers and fill them in at the top
If you think you've figured out the code, DON'T PUT IT IN THE COMMENTS! The answers are part of the giveaway, and I don't want to spoil it for them!
Feel the pride of knowing all about YA books

First, here's the easy one! 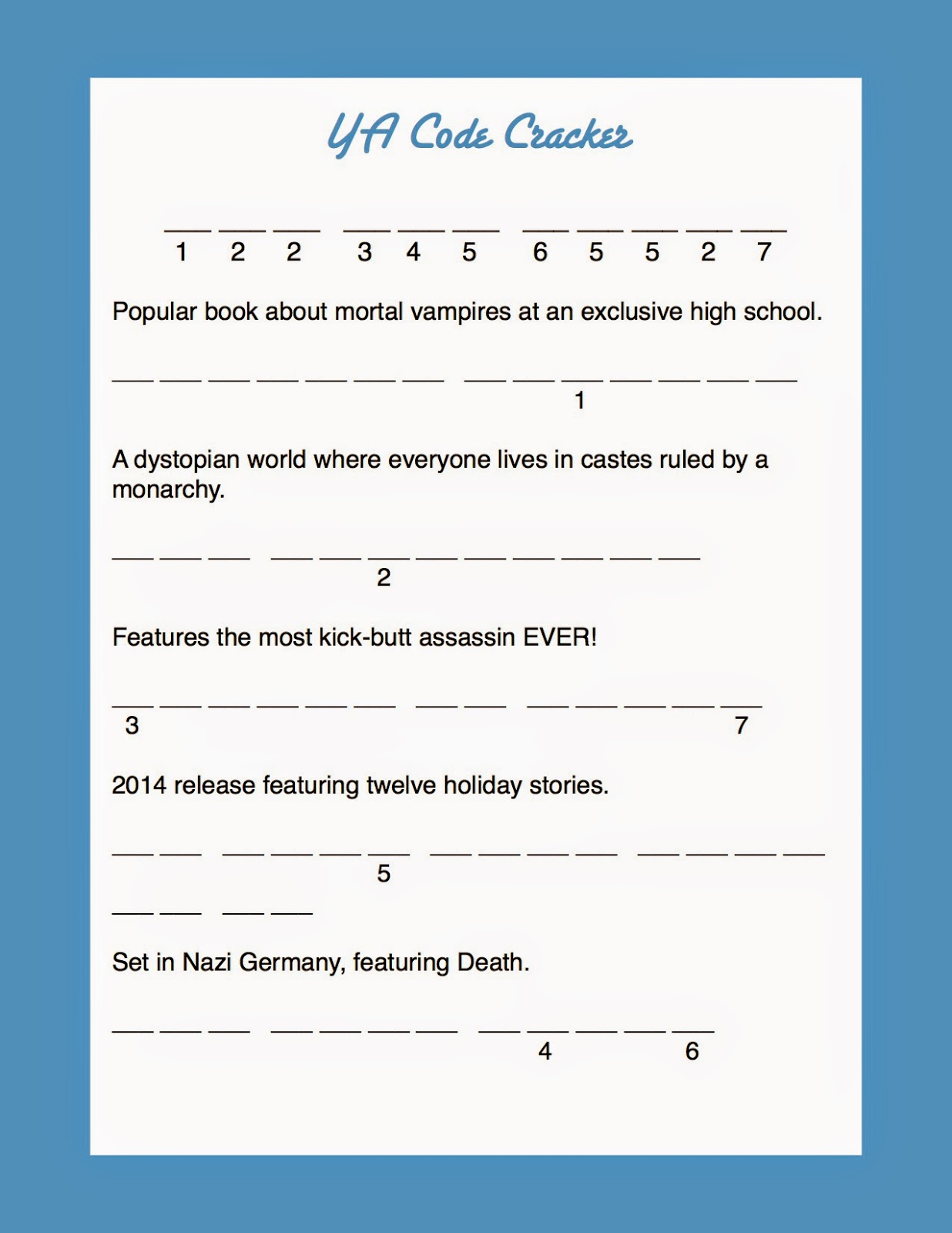 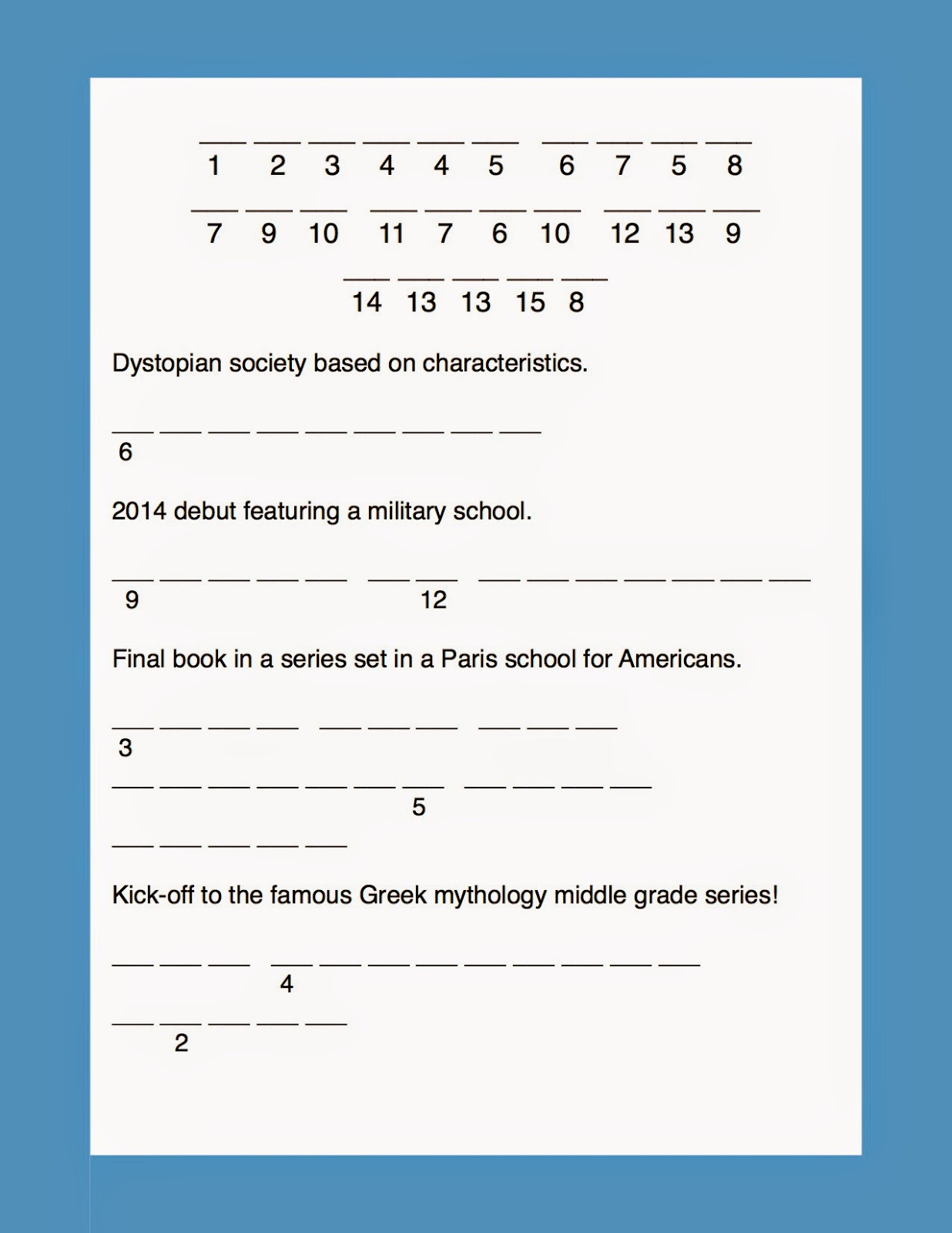 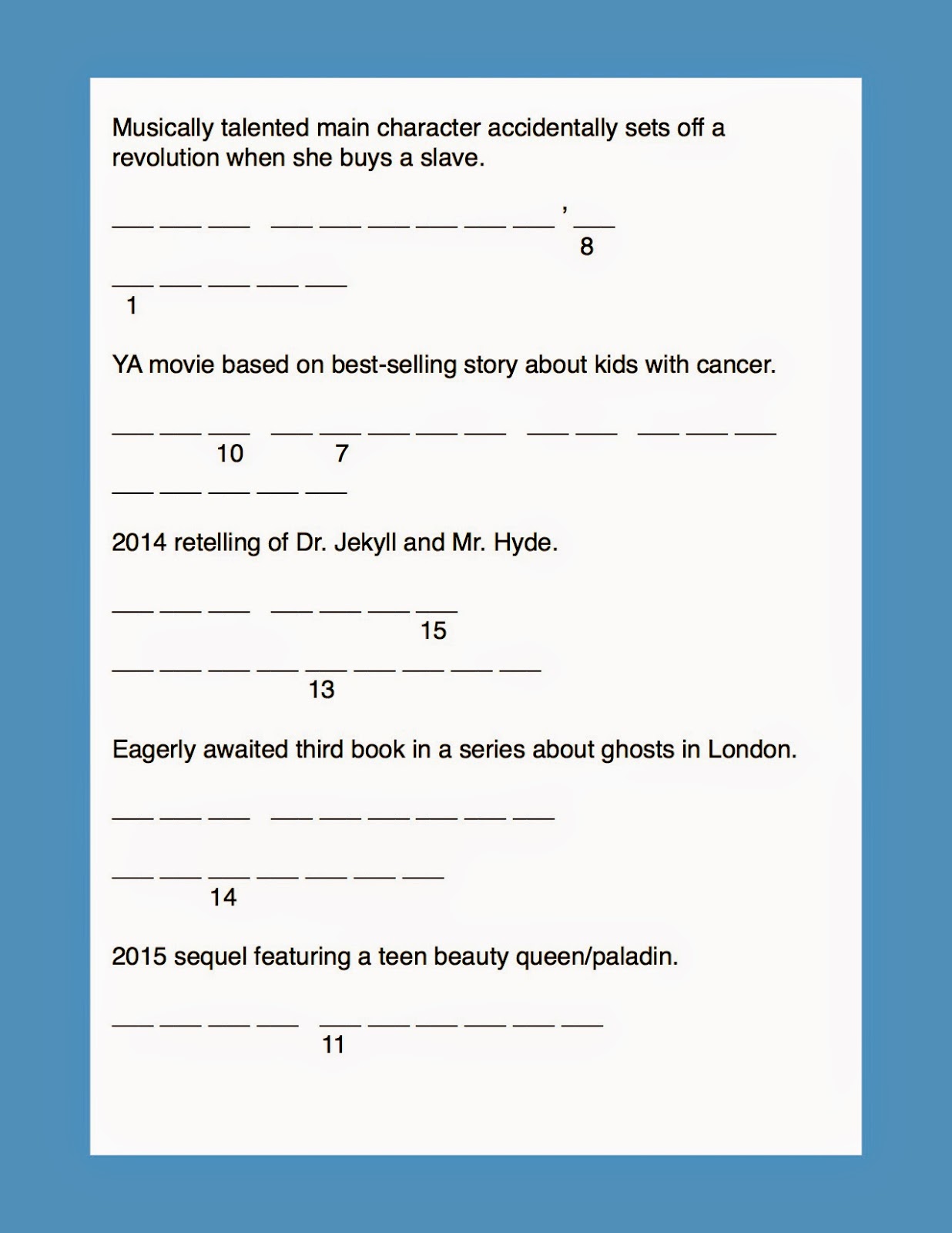 All done? Now, on to the giveaway! Enter and you can win any one of these books! 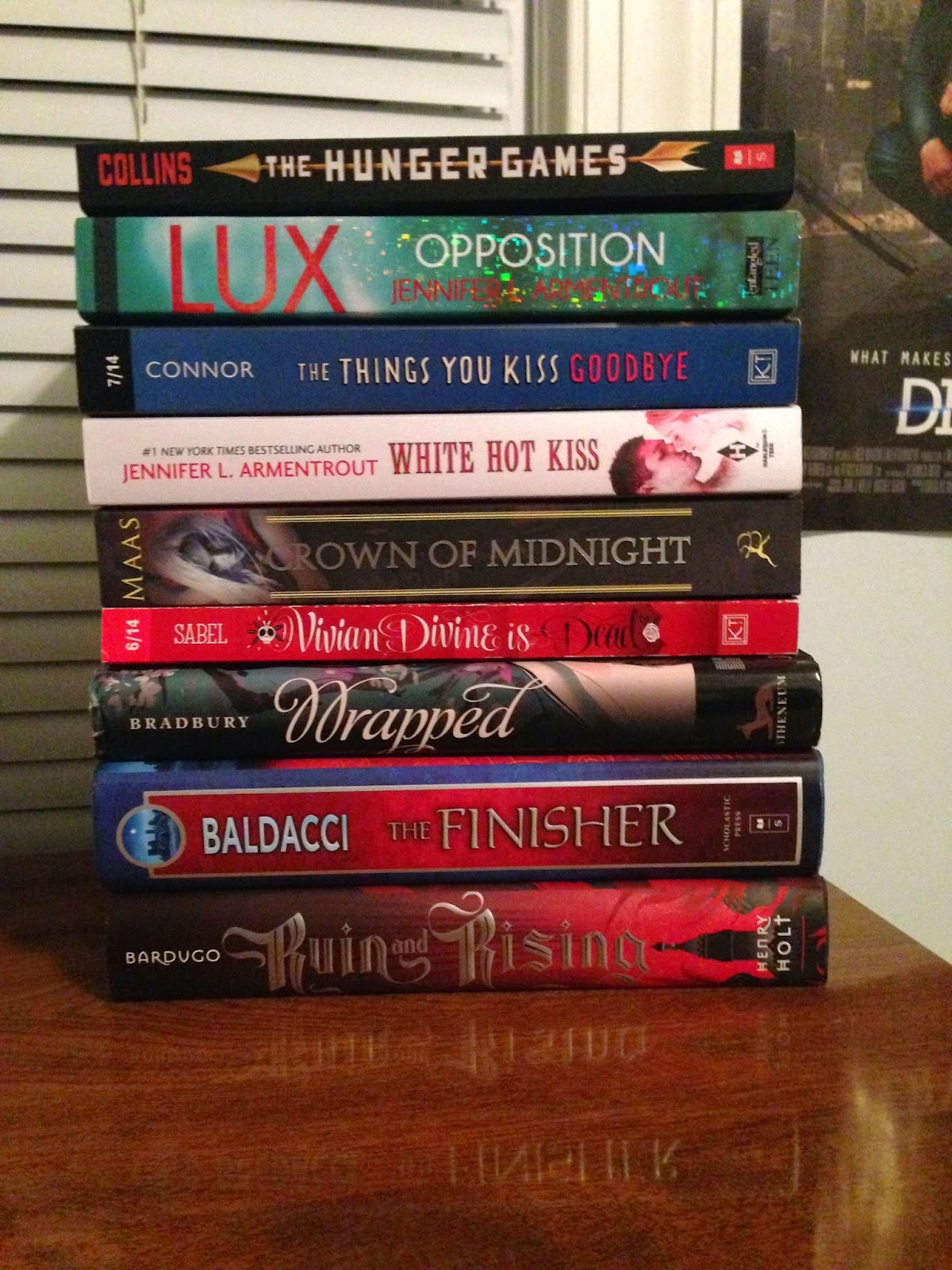 Email ThisBlogThis!Share to TwitterShare to FacebookShare to Pinterest
Labels: Blogging, Giveaway, Wrap Up