I'm super excited to help reveal the cover of Gaia! The first book was fantastic, and this one looks just as good! 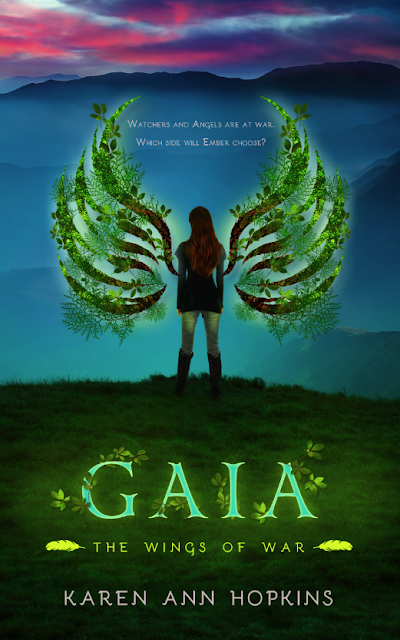 Watchers and Angels are at war. Which side will Ember choose?

As the apocalypse draws near, Demons are becoming bolder and Watchers are joining forces to fight them. But the Watchers have their own agenda, one that defies Biblical scripture. They don’t want the rapture to happen, making them enemies of the Celestial Host.

Against her own better judgment and an impassioned plea from a higher being, Embers stays true to her first mentor, seeking out a powerful earth Watcher to continue her supernatural lessons. Ember has had a glimpse into the future and knows what’s coming. She is being forced to develop her powers as quickly as possible, to fight the dark forces that are spreading across the earth. Heaven’s sentinels have abandoned their posts to prepare for war. And the walls between the planes of existence are weakening. But who can Ember trust? Her guardian and lover is a Demon. Her best friend is a growler. And her mentor is a psychopath. Humankind is on the precipice; at the end of times. As Ember struggles with morality, she soon discovers that there’s something more frightening than anything she’s faced before.

Excited about Gaia? Then be sure and sign up to be a part of the blog tour in August!

There are descendants of angels walking among us. Ember is one of them. And she may be the only hope mankind has as the rapture approaches and evil rises.

Embers is an epic paranormal adventure about an eighteen year old girl who discovers that she's immune to fire and any other injury when she’s in a horrific car crash that kills her parents. Following a violent episode with her aunt's boyfriend, Ember flees Ohio to live with an old relative in the Smoky Mountains of Tennessee. Ember's exuberance at escaping a bad home life soon turns to trepidation when she finds out that she's a Watcher, a descendant of angels. While Ember learns about her heritage and the powers that go along with it, she strikes up friendships with two young men who live in a frightening walled compound in the forest. Inexplicitly drawn to one of the men in particular, an impossible romance develops. But it is cut short when Ember discovers that her new friends are fighting on the opposite side of a war—one that’s been raging between two factions of Watchers for thousands of years. When the compound’s inhabitants threaten the townspeople, Ember takes action, sealing her fate in the ancient battle of good versus evil—and the grayness in between. Ember is up to the challenge, until she realizes that she isn’t only fighting for the lives of the locals and the souls of her new friends. She also might be one of the few champions who will make a stand for all of mankind as the rapture approaches and the end of days begin.

Embers is a dark and gritty YA novel that’s the first book in the series, The Wings of War.

Karen Ann Hopkins resides in northern Kentucky with her family on a farm that boasts a menagerie of horses, goats, peacocks, chickens, ducks, rabbits, dogs and cats. Karen's main job is home schooling the kids, but she finds time to give riding lessons, coach a youth equestrian drill team, and of course, write. She was inspired to create her first book, Temptation, by the Amish community she lived in. The experiential knowledge she gained through her interactions with her neighbors drove her to create the story of the star-crossed lovers, Rose and Noah.

Karen grew up about a mile from Lake Ontario in Upstate New York. She was bitten by the horse bug at the age of five, and after diligently taking riding lessons for several years, was rewarded with her first horse when she turned eleven. The feisty horse's name was Lady, a Quarter Horse-Thoroughbred cross, who became Karen's steadfast companion. Through the years, the constant force in her life was horses. Eventually, she found her place as a riding instructor herself. Before accepting her fate in the barnyard, she worked a short stint as a paralegal, traveled abroad, and guided tourists on horseback riding tours in the Smoky Mountains of Tennessee.

Karen is currently working on her Amish mystery series, Serenity's Plain Secrets, along with the YA paranormal/fantasy series, The Wings of War. Karen is also excited to announce the Temptation series has been optioned for TV by Pilgrim Studios and is available on Audible. More books in the Temptation series are in the works.