I am excited to host the amazing author Andrew Shvarts for the 2017 Debut Authors Bash! Keep reading for an interview with Andrew and information about his debut book, Royal Bastards!

1. What advice do you have for young and aspiring authors?

My biggest advice to aspiring authors (besides read constantly, write constantly), is to avoid the genre trap. That is to say, it’s very easy to lock yourself into just reading and writing in your favorite genre, and growing overly reliant on its conventions and tropes, to the point where you’ve lost sight of the essence of a good story. I think almost all writers start out by imitating our favorites, but the next step is to push past that. If you love romance, try writing scifi; if you love dark fantasy, write a contemporary romantic comedy. I think it’s the fastest way to expand your skillset, and to learn to find the heart of a story.

2. What Royal Bastards from other YA books would hang out with your gang of characters?

Oh god, so many. I think they’d get along swimmingly with the Six of Crows gang, for one!

3. What's your favorite part of the writing process?

There’s a moment when you crack open a story problem that’s been bugging you, when the pieces finally click and make sense and you suddenly see exactly how it all comes together… that moment is pure euphoria.

4. What are three words that would describe Royal Bastards?

5. What were your favorite books as a child?

As a child, I was really into Brian Jacques’ Redwall series and Lloyd Alexander’s Chronicles of Prydain, so fantasy has clearly always been my genre. In middle school, I think Stephen King had a pretty outsized influence on me; I read nearly his entire library in like 2 years. It’s probably why I still really enjoy writing monsters.

6. What upcoming YA books are you excited for?

7. What's the weirdest thing you've looked up for research purposes?

I think there was one week with Royal Bastards where I googled ‘how fast do horses travel’ ‘antivenom or antidote’ and ‘what is a waltz’. That tells you pretty much all you need to know.

8. When did you know you wanted to be a writer?

I’ve pretty much always known. ‘Long rambling highly-exaggerated anecdote’ is my default mode of communication, and has been ever since I was a kid. Writing was just the natural extension of that.

9. Do you put people you know in your books?

Never directly, but elements of real people do always find their way into the characters.

10. How do you defeat writers block?

One thing I’ve learned is that writer’s block is sort of like quicksand; the harder you fight, the faster you sink. Personally, I’ve found that forcing myself to push through it just results in increasing frustration and challenge. At my core, I believe writing should be fun; if it’s not fun, you need to take a break, do something you like for a while, and let your brain reset until inspiration comes again. 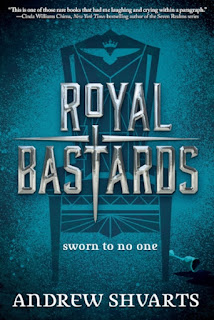 Being a bastard blows. Tilla would know. Her father, Lord Kent of the Western Province, loved her as a child, but cast her aside as soon as he had trueborn children.

At sixteen, Tilla spends her days exploring long-forgotten tunnels beneath the castle with her stablehand half brother, Jax, and her nights drinking with the servants, passing out on Jax’s floor while her castle bedroom collects dust. Tilla secretly longs to sit by her father’s side, resplendent in a sparkling gown, enjoying feasts with the rest of the family. Instead, she sits with the other bastards, like Miles of House Hampstedt, an awkward scholar who’s been in love with Tilla since they were children.

Then, at a feast honoring the visiting princess Lyriana, the royal shocks everyone by choosing to sit at the Bastards’ Table. Before she knows it, Tilla is leading the sheltered princess on a late-night escapade. Along with Jax, Miles, and fellow bastard Zell, a Zitochi warrior from the north, they stumble upon a crime they were never meant to witness.

Rebellion is brewing in the west, and a brutal coup leaves Lyriana’s uncle, the Royal Archmagus, dead—with Lyriana next on the list. The group flees for their lives, relentlessly pursued by murderous mercenaries; their own parents have put a price on their heads to prevent the king and his powerful Royal Mages from discovering their treachery.


The bastards band together, realizing they alone have the power to prevent a civil war that will tear their kingdom apart—if they can warn the king in time. And if they can survive the journey . . .

You Can Find it At:
Goodreads
Amazon
Barnes and Noble
Indiebound
iBooks 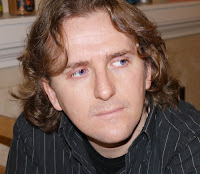 Andrew was born in the Soviet Union, but immigrated to the US when he was four years old. He doesn’t remember much of life there, but has retained a love for weird Russian cartoons and a total indifference to being cold.

Andrew’s passion has always been storytelling, in all its forms: fiction, cinema, narrative video games, and long, rambling, frequently-exaggerated anecdotes. He spent his childhood devouring books, and his adolescence watching straight-to-DVD horror movies and playing jRPGS.

Andrew graduated from Vassar College with degrees in English and Russian literature (aka, the two languages he was already fluent in). While there, he was falsely accused of releasing a bear on campus, and once stole a fence and buried it in a swamp.
Since 2008, Andrew has worked as a videogame writer, producer, and designer. His focus has been on narrative mobile games, especially episodic ones. Some of these titles include Choices: Stories You Play, Surviving High School, Cause of Death, and High School Story.

Andrew is both color-blind and tone-deaf, which probably means he has some latent superpowers he just hasn’t discovered.

He is represented by the amazing Sara Crowe of Pippin Properties.

Andrew lives in San Jose, California, with his wife, son, and two cats.

The best videogame of all time is Metal Gear Solid 3: Snake Eater. This is not a fun fact about Andrew, but an objective truth of the world.