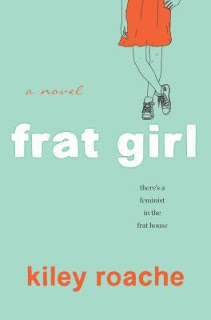 This week, I am super excited for Frat Girl by Kiley Roache! I personally have something against fraternities, so I'm coming in with a bit of a bias, but I'm excited to see how this goes. I can't wait to see how Cassandra attempts to take down the frat house, and how Jordan and the rest of the fraternity respond.

Sometimes the F-word can have more than one meaning….

For Cassandra Davis, the F-word is fraternity—specifically Delta Tau Chi, a house on probation and on the verge of being banned from campus. Accused of offensive, sexist behavior, they have one year to clean up their act. For the DTC brothers, the F-word is feminist—the type of person who writes articles in the school paper about why they should lose their home.

With one shot at a scholarship to attend the university of her dreams, Cassie pitches a research project: to pledge Delta Tau Chi and provide proof of their misogynistic behavior. They’re frat boys. She knows exactly what to expect once she gets there. Exposing them should be a piece of cake.

But the boys of Delta Tau Chi have their own agenda, and fellow pledge Jordan Louis is certainly more than the tank top wearing “bro” Cassie expected to find. With her heart and her future tangled in the web of her own making, Cassie is forced to realize that the F-word might not be as simple as she thought after all.