Because of how many books I want to feature for WoW, I'm going to do two books each week for a little while (probably most of April and May) 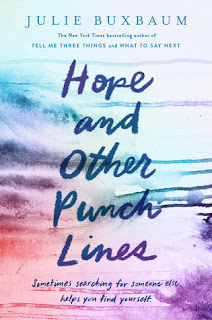 I'm super excited for Hope and Other Punchlines by Julie Buxbaum! The story features a girl who became famous when a photo of herself as a baby during 9/11 went viral. While I was alive during 9/11, I was a toddler and don't actually remember anything from that time. I think for that reason, I find 9/11 stories incredibly fascinating. And know that it's been almost 20 years, we're starting to get some amazing stories that deal with the ways peoples lives were affected. If you're excited for this book and want similar stories, I recommend checking out Towers Falling by Jewel Parker Rhodes and  A Very Large Expanse of Sea by Tahereh Mafi!

Sometimes looking to the past helps you find your future.

Abbi Hope Goldstein is like every other teenager, with a few smallish exceptions: her famous alter ego, Baby Hope, is the subject of internet memes, she has asthma, and sometimes people spontaneously burst into tears when they recognize her. Abbi has lived almost her entire life in the shadow of the terrorist attacks of September 11. On that fateful day, she was captured in what became an iconic photograph: in the picture, Abbi (aka "Baby Hope") wears a birthday crown and grasps a red balloon; just behind her, the South Tower of the World Trade Center is collapsing.

Now, fifteen years later, Abbi is desperate for anonymity and decides to spend the summer before her seventeenth birthday incognito as a counselor at Knights Day Camp two towns away. She's psyched for eight weeks in the company of four-year-olds, none of whom have ever heard of Baby Hope.

Too bad Noah Stern, whose own world was irrevocably shattered on that terrible day, has a similar summer plan. Noah believes his meeting Baby Hope is fate. Abbi is sure it's a disaster. Soon, though, the two team up to ask difficult questions about the history behind the Baby Hope photo. But is either of them ready to hear the answers? 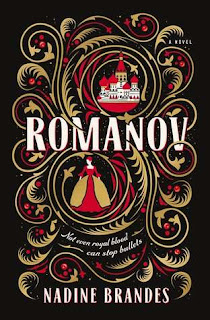 This week I'm also excited for Romanov by Nadine Brandes! I am a sucker for Imperial Russia, especially the Romanovs. I was obsessed with Anastasia as a child, and that obsession has lasted until the present. I'm also intrigued by the fact that it is Anastasia but with magic! Magic always makes stories more interesting. I'm also interested in the romance between Anastasia and an enemy soldier. I can't wait to see how this book plays out!

The history books say I died.

They don’t know the half of it.

Anastasia “Nastya” Romanov was given a single mission: to smuggle an ancient spell into her suitcase on her way to exile in Siberia. It might be her family’s only salvation. But the leader of the Bolshevik army is after them . . . and he’s hunted Romanov before.

Nastya’s only chances of survival are to either release the spell, and deal with the consequences, or enlist help from Zash, the handsome soldier who doesn’t act like the average Bolshevik. Nastya’s never dabbled in magic before, but it doesn’t frighten her as much as her growing attraction for Zash. She likes him. She thinks he might even like her . . .