This week I am excited for These Witches Don't Burn by Isabel Sterling and Stepsister by Jennifer Donnelly! 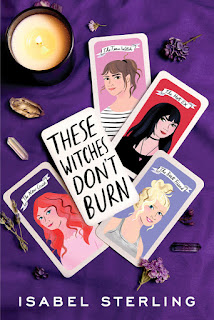 I heard about These Witches's Don't Burn by Isabel Sterling a while back on Goodreads. I had no idea what it was about, but the title alone made me want to read it. I might have even written a poem for class utilizing the title. Also, the author is my name buddy. Once the description came out, I was even more excited. Why? Two words: lesbian witches. Witches was enough to suck me in, but the fact that the main character likes girls makes it even more interesting. I've also seen some awesome reviews, so I can't wait to read this once it comes out!

Hannah's a witch, but not the kind you're thinking of. She's the real deal, an Elemental with the power to control fire, earth, water, and air. But even though she lives in Salem, Massachusetts, her magic is a secret she has to keep to herself. If she's ever caught using it in front of a Reg (read: non-witch), she could lose it. For good. So, Hannah spends most of her time avoiding her ex-girlfriend (and fellow Elemental Witch) Veronica, hanging out with her best friend, and working at the Fly by Night Cauldron selling candles and crystals to tourists, goths, and local Wiccans.

But dealing with her ex is the least of Hannah's concerns when a terrifying blood ritual interrupts the end-of-school-year bonfire. Evidence of dark magic begins to appear all over Salem, and Hannah's sure it's the work of a deadly Blood Witch. The issue is, her coven is less than convinced, forcing Hannah to team up with the last person she wants to see: Veronica.

While the pair attempt to smoke out the Blood Witch at a house party, Hannah meets Morgan, a cute new ballerina in town. But trying to date amid a supernatural crisis is easier said than done, and Hannah will have to test the limits of her power if she's going to save her coven and get the girl, especially when the attacks on Salem's witches become deadlier by the day. 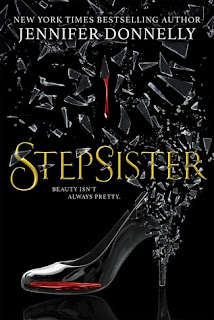 Stepsister by Jennifer Donnelly is pitched as a feminist retelling of Cinderella. And let me tell you, feminist fairy tale retellings are my JAM. We've seen a lot of Cinderella retellings, but rarely from the point of view of the stepsister. I also like the darker tone the description is suggesting. And the cover reinforces that tone with the blood-filled slipper and the shattered glass on the dark background. The recent growth of YA has allowed different types of girls to be shown, and I think Isabelle in Stepsister will be a great addition to that.

Isabelle should be blissfully happy – she’s about to win the handsome prince. Except Isabelle isn’t the beautiful girl who lost the glass slipper and captured the prince’s heart. She’s the ugly stepsister who’s cut off her toes to fit into Cinderella’s shoe ... which is now filling with blood.

Isabelle has tried to fit in. To live up to her mother’s expectations. To be like her stepsister. To be sweet. To be pretty. One by one, she has cut away pieces of herself in order to survive a world that doesn’t appreciate a girl like her. And that has made her mean, jealous, and hollow.

Until she gets a chance to alter her destiny and prove what ugly stepsisters have always known: it takes more than heartache to break a girl.

Evoking the darker, older versions of the Cinderella story, bestselling author Jennifer Donnelly shows us that ugly is in the eye of the beholder, and uses her trademark wit and wisdom to send an overlooked character on a journey toward empowerment, redemption, and a new definition of beauty.