I am super excited to be part of the Dark Shores blog tour! Read on for my review and a guest post by the author! And check out the end of the post for a special giveaway! 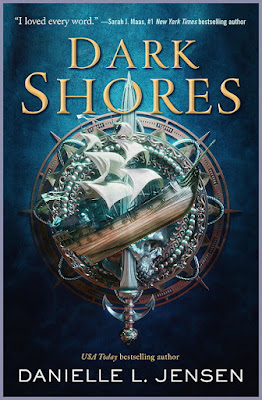 High seas adventure, blackmail, and meddling gods meet in Dark Shores, the first novel in a new YA fantasy series.

In a world divided by meddlesome gods and treacherous oceans, only the Maarin possess the knowledge to cross the Endless Seas. But they have one mandate: East must never meet West.

A PIRATE WITH A WILL OF IRON

Teriana is the second mate of the Quincense and heir to the Maarin Triumvirate. Her people are born of the seas and the keepers of its secrets, but when her closest friend is forced into an unwanted betrothal, Teriana breaks her people’s mandate so her friend might escape—a choice with devastating consequences.

A SOLDIER WITH A SECRET

Marcus is the commander of the Thirty-Seventh, the notorious legion that has led the Celendor Empire to conquer the entire East. The legion is his family, but even they don’t know the truth he’s been hiding since childhood. It’s a secret he’ll do anything to protect, no matter how much it costs him – and the world.

When an Empire senator discovers the existence of the Dark Shores, he captures Teriana’s crew and threatens to reveal Marcus’s secret unless they sail in pursuit of conquest, forcing the two into an unlikely—and unwilling—alliance. They unite for the sake of their families, but both must decide how far they are willing to go, and how much they are willing to sacrifice.

You Can Find it At:
Goodreads
AMAZON
Barnes & Noble
Book Depository

I've been interested in Dark Shores since I saw the cover reveal. It grabbed my attention and hasn't let go. When I had to opportunity to be on the blog tour I jumped at the chance. The book starts out a little slow going, but it picks up after a time jump. And it's a fast enough read that I read it in less than a day. Overall the book was really good, I just had a couple complaints that brought the rating down a star.

I absolutely loved Teriana. She's tough and had to make some hard choices. I love her commitment to her family and her crew. She also looks out for her best friend Lydia, when many in her position wouldn't have befriended her in the first place. On the topic of Lydia, I have some theories, but I'm not sure if they count as spoilers. What I will say is this: she isn't around after the time jump, but I don't think we've seen the last of her.

While I really like Teriana, I'm not a big fan of Marcus. He states in the story that he doesn't think he's worthy of her, and personally I agree with him. While he, like Teriana, had to make some tough choices in life, he still lives in a place of relative privilege. Especially considering she's basically his captive the entire book. I also feel like he doesn't fully see just how bad the Empire's conquering is. He sees the cost on battlefield, but he doesn't understand the personal and spiritual costs to what he's doing. And even when he does see that what he's doing is wrong, he only makes minimal sacrifices.  I almost wanted Teriana to be like "I like you, but not enough to be with you right now. But call me up if you ever want to start a rebellion." Because there's definitely a rebellion against the Empire coming.

I loved the world I got to see in Dark Shores. I'm unsure if the final copy has a map or not, but I know my digital ARC didn't. I'd love to see one if one exists, because I think it would help me visualize the story better. While we get a lot of characters talking about the world, we don't see a whole lot of it. Most of the book takes place at sea and in two countries. I want to better understand the differences of the East vs the West and just why the must never meet. Hopefully we'll get more answers in book two. This world is really interesting, and I hope to learn more about the gods, the different people, and how everything ties together.

“Richly-woven, evocative, and absolutely impossible to put down―I was hooked from the first lines! Dark Shores has everything I look for in a fantasy novel: fresh, unique settings, a cast of complex and diverse characters, and an unflinching boldness with the nuanced world-building. I loved every word.” ―Sarah J. Maas, #1 New York Times bestselling author

"The book grabs readers from the beginning with its stellar worldbuilding and multidimensional characters, and the mythical elements are truly believable within the constructs of the story. The perspective shifts between the viewpoints of Teriana and Marcus from chapter to chapter, offering readers greater insights into each. ...A gripping introduction to a new series." ―Kirkus Reviews (starred)

"This is a lush, imaginative world, and as the focus shifts between Teriana and Marcus, it becomes clear that the readers are only getting a glimpse of its complicated history and mythology. ...Their secrets don’t, of course, stop Teriana and Marcus from embarking on a steamy romance, and fans of Rutkoski’s sighworthy The Winner’s Kiss and the high-stakes sea adventure of Levenseller’s Daughter of the Pirate King will want to know where Marcus and Teriana journey to next." ―Bulletin of the Center for Children's Book

Danielle L. Jensen is the USA Today bestselling author of The Malediction Novels: Stolen Songbird, Hidden Huntress, Warrior Witch, and The Broken Ones, as well as The Bridge Kingdom (Audible Originals). Her latest novel, Dark Shores, will be released by Tor Teen in May of 2019. She lives with her family in Calgary, Alberta. 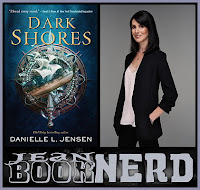