This week I am excited for two August releases! First is Of Ice and Shadows by Audrey Coulthurst and second is These Divided Shores by Sara Raasch! Both books are sequels, which is also exciting. 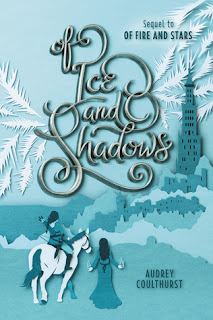 I read Of Fire and Stars as an ARC back in 2016. And I absolutely LOVED it! So when I heard that a sequel was finally coming out, I was thrilled. I also recently got my hands on an ARC of Of Ice and Shadows, and that will probably be the next book I read. Book one ended in such a way that it could be a standalone or the start of a series. I'm not positive, but I believe it was initially set to be just one book, but it did so well that the publisher okayed a sequel (and a prequel). Whatever happened, I'm excited that I finally get to hold the book in my hands. I can't wait to read Mare and Denna's next adventure and to cheer them on the entire way!

Princesses Denna and Mare are in love and together at last—only to face a new set of dangers.

Mare just wants to settle down with the girl she loves, which would be easier if Denna weren’t gifted with forbidden and volatile fire magic. Denna must learn to control her powers, which means traveling in secret to the kingdom of Zumorda, where she can seek training without fear of persecution. Determined to help, Mare has agreed to serve as an ambassador as a cover for their journey.

But just after Mare and Denna arrive in Zumorda, an attack on a border town changes everything. Mare’s diplomatic mission is now urgent: She must quickly broker an alliance with the Zumordan queen to protect her homeland. However, the queen has no interest in allying with other kingdoms—it’s Denna’s untamed but powerful magic that catches her eye. The queen offers to teach Denna herself, and both girls know it would be dangerous to refuse.

As Denna’s powers grow stronger, Mare does her best to be the ambassador her kingdom needs. Her knowledge of Zumorda and its people grows, and so too do her suspicions about the queen’s intentions. With rising tensions and unexpected betrayals putting Mare and Denna in jeopardy and dangerous enemies emerging on all sides, can they protect their love and save their kingdoms? 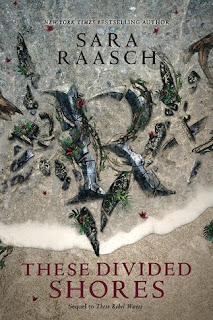 These Divided Shores is the sequel of These Rebel Waves. I absolutely loved book one, and reviewed it for Teenreads. The series also does a cool job of mixing technology (steam boats, etc) with fantasy. I ship Lu and Vex, and I hope they are able to get together in this book. It'll also be cool to see Lu and Ben interact. Ben was largely separate from the other characters in book one, some I'm excited to see him more in the story. Basically, I can't wait to find out what happens next and I hope all my preciouses are okay!

As a child, she committed unforgivable acts to free Grace Loray from King Elazar of Argrid. Now Elazar’s plan to retake the island has surpassed Lu’s darkest fears: he’s holding her and his son, Ben, captive in an endlessly shifting prison, forcing them to make a weapon that will guarantee Elazar’s success. Escape is impossible—unless Lu becomes the ruthless soldier she hoped never to be again.

Vex failed to save Lu and Ben—and that torments him as much as his Shaking Sickness. With the disease worsening, Vex throws himself into the rebellion against Argrid. The remaining free armies are allied with the stream raider syndicates—and getting them to cooperate will take a strength Vex thought burned on a pyre six years ago.

Imprisoned, betrayed, and heartbroken, Ben is determined to end his father’s rampage. Watching Elazar sway the minds of Grace Loray as he did those of Argrid, Ben knows he has to play his father’s game of devotion to win this war. But how can a heretic prince defeat the Pious God?

As armies clash and magic rises, Lu, Vex, and Ben will confront their pasts . . . or lose their futures forever.