This week I am excited for Crown of Coral and Pearl by Mara Rutherford and All the Bad Apples by Moïra Fowley-Doyle! 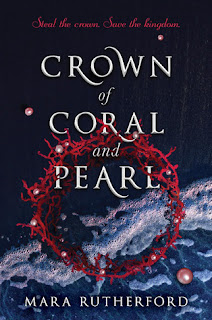 Crown of Coral and Pearl looks to be political fantasy, similar to many other books on the market. That said, this plot set-up is my catnip, and I cannot get enough of it. The setting also looks pretty unique, with the main character coming from an island village. In this world, the princes choose maidens from the various island villages to wed. The main character Nor never thought she'd be chosen as she was scarred as a child, but when her sister gets injured, she has to go in her place. The book seems to be full of political machinations, which I love to see. I also need to give a shout-out to the gorgeous cover, which is what initially drew me to the book! I can't wait to see how this turns out, and how it's similar vs different to other books in the genre.

For generations, the princes of Ilara have married the most beautiful maidens from the ocean village of Varenia. But though every girl longs to be chosen as the next princess, the cost of becoming royalty is higher than any of them could ever imagine…

Nor once dreamed of seeing the wondrous wealth and beauty of Ilara, the kingdom that’s ruled her village for as long as anyone can remember. But when a childhood accident left her with a permanent scar, it became clear that her identical twin sister, Zadie, would likely be chosen to marry the Crown Prince—while Nor remained behind, unable to ever set foot on land.

Then Zadie is gravely injured, and Nor is sent to Ilara in her place. To Nor’s dismay, her future husband, Prince Ceren, is as forbidding and cold as his home—a castle carved into a mountain and devoid of sunlight. And as she grows closer to Ceren’s brother, the charming Prince Talin, Nor uncovers startling truths about a failing royal bloodline, a murdered queen… and a plot to destroy the home she was once so eager to leave.

In order to save her people, Nor must learn to negotiate the treacherous protocols of a court where lies reign and obsession rules. But discovering her own formidable strength may be the one move that costs her everything: the crown, Varenia and Zadie. 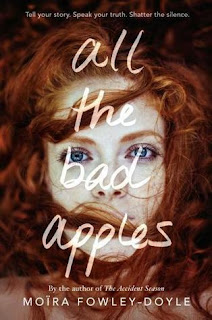 I heard about All the Bad Apples a while back, but sorta put is off to the side. A review I saw on Twitter the other day got me reinterested in it, and when I learned it had a lesbian narrator, I was all in! Also, the cover is absolutely gorgeous! The hair! The eyes! The tagline! I've seen multiple reviews say that the book is really angry, and I am all in for that. More angry girls 2019! I've also heard it's pretty emotional, so I'm gonna need to make sure that I read it at the right time. That said, I can't wait to get my hands on it! I'm pretty sure this is the tweet I saw that sealed the deal for me.

The day after the funeral all our mourning clothes hung out on the line like sleeping bats. 'This will be really embarrassing,' I kept saying to my family, 'when she shows up at the door in a week or two.'

When Deena's wild and mysterious sister Mandy disappears - presumed dead - her family are heartbroken. But Mandy has always been troubled. It's just another bad thing to happen to Deena's family. Only Deena refuses to believe it's true.

And then the letters start arriving. Letters from Mandy, claiming that their family's blighted history is not just bad luck or bad decisions - but a curse, handed down through the generations. Mandy has gone in search of the curse's roots, and now Deena must find her. What they find will heal their family's rotten past - or rip it apart forever.