I am so excited to be part of the blog tour for The Lost City by Amanda Hocking! 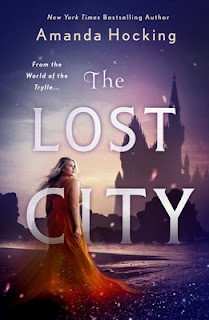 Title: The Lost City
Author: Amanda Hocking
Publisher: Wednesday Books
Release: July 7, 2020
Pages: 384
Review: 4 Stars
First Impressions
I knew when I first heard about The Lost City that I wanted to read it. I've read all the previous books set in this world and enjoyed them all, though the first trilogy is my favorite. I went into the book with little background knowledge, only that it was about a new character and would likely have some connections to the previous books. I think that worked well for me, but the one thing I would recommend is checking out the guide in the back of the world to get a lay of the land if it's been a while since you've read the previous books.
Characters
The Lost City follows Ulla. She happens to be a nanny for the children of Finn, one of the main characters from the Trylle series. She was abandoned as a baby and wants to learn more about her parents, but all she knows is that she was left at an inn by a woman from the Omte troll tribe who seemed to be a warrior. With her unclear origins, Ulla has a hard time figuring out her place in the world. Being amongst other trolls feels right to her, but many don't accept her heritage of mixed tribes.
There are also a handful of side characters. It's unclear which will be notable characters further in the series, but that kind of worked well. The first major side character we meet is Hannah. She is 12 years old and one of the children Ulla helps care for. Hannah is supposed to spend the summer with her grandparents, but ends up tagging along Ulla's adventures. Perhaps my favorite side character is Eliana. Her origins are even more mysterious than Ulla's, and she has a bit of a memory problem. A larger part of the plot is helping her figure out what's going on. There's also Panuk, who Ulla works with. He seems nice and is set up as the love interest, but I have to say, I'm more intrigued by a certain mystery guy Ulla keeps running into. I'm curious to see where all that goes.
World Building
The Lost City builds heavily on the world of the previous two trilogies. I highly recommend reading those books before diving into the new series! The world of the clones with their five tribes is highly complex, but Ulla (and Hocking) does a good job of explaining pertinent information in the moment. If you're willing to just roll with whatever isn't explained, you should avoid any world building headaches.
Final Thoughts
This is a great addition to the world Amanda Hocking has created! The Trylle trilogy will hold a special place in my heart as my favorite, but this will definitely appeal to fans of the previous books. I read the book in practically an afternoon, so it's a fun, fast read. And for readers just getting introduced to these book, there are six great ones to check out right now (including an awesome bundle of the entire Trylle series as one book)!
Synopsis:
Amanda Hocking, the New York Times bestselling author of The Kanin Chronicles, returns to the magical world of the Trylle Trilogy with The Lost City, the first novel in The Omte Origins—and the final story arc in her beloved series.
The storm and the orphan
Twenty years ago, a woman sought safety from the spinning ice and darkness that descended upon a small village. She was given shelter for the night by the local innkeepers but in the morning, she disappeared—leaving behind an infant. Now nineteen, Ulla Tulin is ready to find who abandoned her as a baby or why.
The institution and the quest
Ulla knows the answers to her identity and heritage may be found at the Mimirin where scholars dedicate themselves to chronicling troll history. Granted an internship translating old documents, Ulla starts researching her own family lineage with help from her handsome and charming colleague Pan Soriano.
The runaway and the mystery
But then Ulla meets Eliana, a young girl who no memory of who she is but who possesses otherworldly abilities. When Eliana is pursued and captured by bounty hunters, Ulla and Pan find themselves wrapped up in a dangerous game where folklore and myth become very real and very deadly—but one that could lead Ulla to the answers she’s been looking for.
You Can Find it At:
Macmillan
Books-A-Million
Barnes & Noble
Amazon
Early Praise for The Lost City:
"Hocking’s fast, engaging fantasy will draw in new and seasoned fans of the genre... [She] keeps the surprises coming, [leaving] readers eager to know more"
—School Library Journal (starred review)
Author Bio:

AMANDA HOCKING is the author of over twenty young adult novels, including the New York Times bestselling Trylle Trilogy and Kanin Chronicles. Her love of pop culture and all things paranormal influence her writing. She spends her time in Minnesota, taking care of her menagerie of pets and working on her next book.
You Can Find Her At:
Website
Twitter
Facebook
Blog
Pinterest
Goodreads
Posted by Isabel C at 7/09/2020 12:00:00 AM