A Dark and Hollow Star by Ashley Shuttleworth 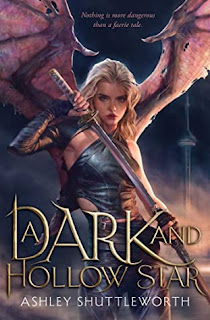 Title: A Dark and Hollow Star
Author: Ashley Shuttleworth
Publisher: Simon Pulse
Release: February 23, 2021
Pages: 512
Review: 5 Stars
Synopsis:
Choose your player.
The “ironborn” half-fae outcast of her royal fae family.
A tempestuous Fury, exiled to earth from the Immortal Realm and hellbent on revenge.
A dutiful fae prince, determined to earn his place on the throne.
The prince’s brooding guardian, burdened with a terrible secret.
For centuries, the Eight Courts of Folk have lived among us, concealed by magic and bound by law to do no harm to humans. This arrangement has long kept peace in the Courts—until a series of gruesome and ritualistic murders rocks the city of Toronto and threatens to expose faeries to the human world.
Four queer teens, each who hold a key piece of the truth behind these murders, must form a tenuous alliance in their effort to track down the mysterious killer behind these crimes. If they fail, they risk the destruction of the faerie and human worlds alike. If that’s not bad enough, there’s a war brewing between the Mortal and Immortal Realms, and one of these teens is destined to tip the scales. The only question is: which way?
Wish them luck. They’re going to need it.
You Can Find it At:
The Regulator Bookshop
Goodreads
Bookshop
IndieBound
Barnes & Noble
Amazon
Simon and Schuster
First Impressions

I really enjoyed this book! In general, I preferred Nausicaä and Arlo's chapters, but Vehan and Aurelian weren't bad either. I love Nos so so so so much! She is chaos incarnate, which makes her a super fun character. She's also incredibly broken by the experiences of her past. I'm glad we get to be in her head during the book, because it helps us get to know her in a way that you just wouldn't get otherwise.

The book is a little slow at the beginning, but I don't know how much has to do with it truly being slow vs the weird format I had to read it in. The eARC was kinda messed up and so until I was *really* into it, reading was slow going.

Some of my favorite moments are when Nos and Arlo are interacting. Arlo gives so much of herself, even to virtual strangers, and Nos realizes that. Nos has never been given much care (except maybe from her sister Tisiphone), and Arlo opens a door to healing that wasn't previously open. I can't wait to see how their relationship develops.

On the other hand, there's Aurelian and Vehan. Vehan is amazingly innocent. While he has struggles, everyone in his life has kept from him just how cruel (and evil) his mother is. Aurelian is partially responsible for that, but for good reasons. These boys are going to need to come to terms with a lot of hard stuff before they have any true chance of being together.
World Building
A Dark and Hollow Star is set in our world, but it's much bigger than it is for us. First off, there's the faerie courts and all that entails. Additionally there's the realm of the immortals. Arlo, Vehan, and Aurelian are all mortal (even if they have a longer lifespan). Nos though, she's a former Fury that has been banished to the mortal realm. And boy is she pissed off about it. So Nos has made it her mission to make trouble for immortals, which is how she gets drawn into a mess in Toronto with half-fae, half-human children being killed. You could say it all goes downhill from there.
Final Thoughts

One thing I really appreciated was how full the book was of casually queer characters. A range of sexualities and genders are present, and every POV character is queer. Non-cis/straight identities are everywhere, and it felt like a little snapshot of what our own world could be. As I said before, this world is really big. You learn a lot in this book, and yet it still feels like I know nothing. I just know this series will be full of twists and turns and I can't wait to discover them all!
Author Bio: 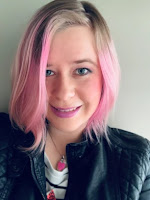 Ashley Shuttleworth is a young adult fantasy author born in Canada and currently living in Ontario. They have a degree in English Literature from Trent University with an emphasis on Milton and the Romantic Period, as well as a focus on Ancient History and Classical Studies. They’ve worked many jobs in their life, roles such as a bookseller for Indigo Bookstore, a barista at Starbucks, a teacher in South Korea, and a Wine Merchant for their local wine store. In their spare time they enjoy cosplay and gaming (particularly The Legend of Zelda, Final Fantasy, and Kingdom Hearts) and adding to their ever-growing collection of prop swords. They’re also pretty big into winter sports like skating and skiing and driving back and forth between work without snow tires. Despite the fact that there are roughly 9000 fanfics on their computer, A DARK AND HOLLOW STAR is their first published novel.
You Can Find Them At:
Website
Twitter
Goodreads
Instagram
Posted by Isabel C at 1/20/2021 12:00:00 AM