Somebody Told Me by Mia Siegert 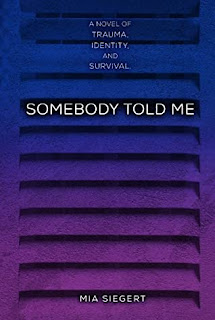 Title: Somebody Told Me
Author: Mia Siegert
Publisher: Carolrhoda Lab
Release: April 7, 2020
Pages: 272
Review: 5 Stars
Synopsis:
A novel of trauma, identity, and survival.
After an assault, bigender seventeen-year-old Aleks/Alexis is looking for a fresh start―so they voluntarily move in with their uncle, a Catholic priest. In their new bedroom, Aleks/Alexis discovers they can overhear parishioners in the church confessional. Moved by the struggles of these "sinners," Aleks/Alexis decides to anonymously help them, finding solace in their secret identity: a guardian angel instead of a victim.
But then Aleks/Alexis overhears a confession of another priest admitting to sexually abusing a parishioner. As they try to uncover the priest's identity before he hurts anyone again, Aleks/Alexis is also forced to confront their own abuser and come to terms with their past trauma.
You Can Find it At:
The Regulator Bookshop
Goodreads
Indiebound
Barnes & Noble
Amazon
Review:
TW: sexual assault, homophobia, transphobia
First Impressions
Fun fact: I was planning to start this book a day earlier than I did, but then a coup happened and I got a little distracted. Anyways, this book has been on my TBR for a while, and I finally got a copy for my birthday a couple weeks ago. It's been sitting there staring at me until I was in the right mood to pick it up. Going in I knew it would be a tough story. It deals with sexual assault (both past for the main character and ongoing for others) and unaccepting Catholic relatives. The main character Aleks/Alexis goes to live with their Catholic aunt and uncle (the uncle is a priest) after being sexually assaulted. Given how unaccepting the aunt and uncle are, they go semi-back into the closet, presenting only as female. This obviously takes a toll on their mental health, but luckily Aleks/Alexis meet some pretty cool people while there.
Characters
First, there's Sister Bernadette. She's a nun at the church, and Aleks'Alexis pretty quickly develop a crush on her. I really loved Bernie, and appreciated how she provided contrast to some of the more negative characters associated with the church. There's also Dima, who's thinking about studying to be a priest but has some hidden secrets. And there's Deacon Jameson, who is an absolute cinnamon roll hidden under a tough exterior. I loved this cast of characters and the friendship they developed.
Worldbuilding/Writing
Somebody Told Me does a good job of mixing the dark with the light. There is some truly tough content. Aleks/Alexis has flashbacks to painful memories of former friends and their sexual assault. They overhear confessions through the vent in their room. Sometimes minor, sometimes hard (but in a way they can help), and sometimes horrible. Aleks/Alexis also deals with what reads like intrusive thoughts. As someone who experiences them to a lesser degree, I thought they were a strong addition to the story to show how Aleks/Alexis is dealing with anxiety and trauma. Despite the hardships they face, the story also shows Aleks/Alexis helping people in need that they overhear confessing, such as a woman in desperate need of a job to care for her family and a man with a financially abusive girlfriend. There are also moments of true levity, when the characters are joking around and when Aleks/Alexis connects with their aunt. I think the book does a good job of presenting a hard subject in such a way that it's digestible to readers who might have trouble with the topic.
Final Thoughts
Last, but not least, I really appreciated the ending. I won't spoil anything, but let's just say that bad people got what they deserved. I wouldn't have minded another chapter or two to show the beginning of the healing process (emotional and physical) of the characters, but I think it still ended strongly.
Author Bio: 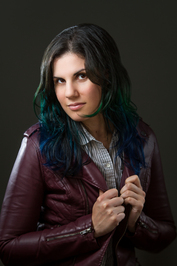 Mia Siegert's sophomore novel SOMEBODY TOLD ME released in Spring 2020 with great trade reviews (SLJ's verdict was "Highly Recommended Read") and features in Teen Vogue, Book Riot, Buzzfeed, and many more.
Siegert's debut JERKBAIT made Goodreads Best YA of May 2016, Top 12 Indie YA from Barnes & Noble Teen Blog, Top 10 YA of 2016 from AndPop!, and gained attention from SB Nation, Publishers Weekly, Barnes & Noble Teen Blog, AndPOP!, MaximumPOP! UK, VOYA Magazine, Paste Magazine, Teen Librarian Toolbox, among many others.
When not writing, Siegert is a self-taught costume designer with their husband and two cats. Their work has appeared on Netflix's "Unbreakable Kimmy Schmidt" and the CW's "Crazy Ex-Girlfriend."
You Can Find Them At:
Website
Twitter
Instagram
Facebook
Goodreads
Posted by Isabel C at 1/08/2021 02:04:00 PM