Welcome, welcome! It's an exciting time here in 2021, and this is my first blog tour stop of the year! I was absolutely obsessed with the Iron Fey series when I was a kid, which makes it all the more awesome to be part of the blog tour for The Iron Raven! This book is kicking off an all-new adventure with everyone's favorite prankster, Puck! 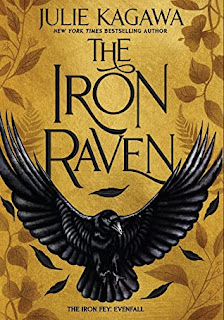 Title: The Iron Raven
Author: Julie Kagawa
Publisher: Inkyard Press
Release: February 9, 2021
Pages: 336
Review: 5 stars
Synopsis:
Wicked faeries and fantastic danger... Welcome to book one of the new trilogy in New York Times bestselling author Julie Kagawa's Iron Fey fantasy series, as infamous prankster Puck finally has a chance to tell his story and stand with allies new and old to save Faery and the world.
"YOU MAY HAVE HEARD OF ME..."
Robin Goodfellow. Puck. Prankster, joker, raven, fool... King Oberon's right-hand jester from A Midsummer Night's Dream. The legends are many, but the truth will now be known as never before, as Puck finally tells his own story and faces a threat to the lands of Faery and the human world unlike any before.
With the Iron Queen Meghan Chase and her prince consort, Puck's longtime rival Ash, and allies old and new by his side, Puck begins a fantastical and dangerous adventure not to be missed or forgotten. Filled with myths and faery lore, romance and unfathomable dangers, The Iron Raven is book one of a new epic fantasy trilogy set in the world of The Iron Fey.
You Can Find it At:
Indiebound
Goodreads
Amazon
Barnes & Noble
Books-A-Million
Apple Books
Google Play
Review:
First Impressions
I initially read the Iron Fey series back in middle school. I continued reading the sequel series as it came out, and am super excited for this series featuring lovable Puck! I really enjoyed The Iron Raven, and recommend checking it if you were a fan of the original series. Given the knowledge needed to fully understand the characters and backstory, I also recommend reading the previous books before jumping in to this new story.
Characters
Puck is always supporting other characters, so it was cool to see him in the lead. Puck has a difficult journey in this book, as an early incident ends up bringing up a lot of old feelings. I also really enjoyed getting to know more of his history and who he was before the original series. While the book follows a number of known characters, we are also introduced to a new one. Nyx is Forgotten, and joins Puck on his journey over the course of the book. I absolutely loved her character, and I hope we get her POV in book two! Her past is super compelling, and I always dig a mysterious murder lady. All the knives for the win!
World Building
For readers of the previous series, much of the book is set in a world we already know. That said, it's not all rehashing the same paths. The Iron Raven explores new aspects of the three courts, especially on a journey through the iron realm, and gives a look into how the faerie world has changed since we last saw it. It was fun to both see new locations and relearn about old ones through new eyes. I went into the book a little fuzzy about the previous ones, and was a little confused at times, but I found the best way to manage was just to roll with it. The world of the Iron Fey is so big that there's no way I could remember all of it, especially since I haven't reread the rest of the series in a wall.
Final Thoughts
It was so fun to revisit such a beloved world. I loved reconnecting with old characters and meeting new ones (my beloved Nyx for example). This is definitely the start of something big, and I can't wait to read more!
Interview:
Q: What was the hardest scene to write in The Iron Raven? What was the easiest?
A: I can't say too much without giving away spoilers, but the hardest scene in The Iron Raven was near the very end of the book when they're fighting the final Big Bad, and Puck does a completely Puck-ish thing to give them a fighting chance. It was random and irreverent and completely ridiculous, so I had to get it just right to avoid making it cheesy. The easiest scene was one where Puck and Ash were semi-seriously threatening each other, because I know those two so well and it was all rather familiar.
Q: Did you hide any secrets in your book? (names of friends, little jokes, references to things only some people will get)?
A: Lol, well I'm going to reveal my absolute geekiness and say that the name of the newest character, Nyx, is actually my D&D character, a dragon-hating elven assassin. There were a few tweaks, of course, but Nyx is...well, me in a D&D campaign. :P
Q: What do you hope people remember about The Iron Raven?
A: I hope The Iron Raven brings back the feel of the first Iron Fey novels, where everything was new and surreal and exciting. I hope readers will experience the same wonder and belief in magic, friendship, love and heroism that I tried to present in the first series.
Q: Did The Iron Raven have a certain soundtrack you listened to while writing?
A: My music tastes are eclectic, but I do listen to a lot of Two Steps From Hell while writing, because its mostly instrumental and they have some epic soundtracks.
Q: What is your dream cast for The Iron Raven?
A: I am so bad at this question I don't even think I can answer it. Apologies, but I really am terrible at remembering actors and actresses. This is a great question for fans, though. Who would your dream cast be for an Iron Fey series?
Author Bio:

Julie Kagawa is the New York Times, USA TODAY and internationally bestselling author of The Iron Fey, Blood of Eden, The Talon Saga and the Shadow of the Fox series. Born in Sacramento, she has been a bookseller and an animal trainer and enjoys reading, painting, playing in her garden and training in martial arts. She lives in North Carolina with her husband and a plethora of pets. Follow her on Facebook, Twitter and Instagram.
You Can Find Her At:
Website
Twitter
Instagram
Facebook
Goodreads
Posted by Isabel C at 2/04/2021 12:00:00 AM