The Blog is One Year Old!

That's right! August 11 was the blog's first birthday. That means, that it's time to celebrate! So put on your party hats, grab some cake and ice cream, sit back, and relax. There's loads of fun stuff ahead, so read on! 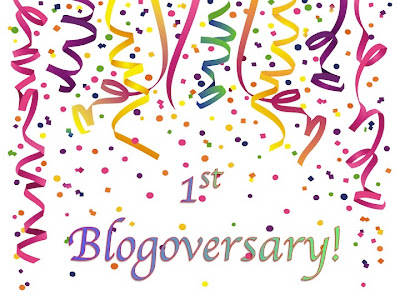 Stats:
The blog has been around for a year, and while it hasn't blown anything out of the water, the page views and retweets have astounded me! With the help of people sharing on Facebook, Tweeting on Twitter, etc, the blog has been noticed more and more. As of now there are:
5678 Page Views
86 Posts
69 Reviews
371 Tweets
62 Followers
16 Comments
94 Facebook Posts
31 Page Likes
10 Instagram Posts
8 Instagram Followers
And Countless Likes, Favorites, Replies, Retweets, and Comments on all networks!

Upcoming Events:
If you've followed the blog, then you'll notice that I've recently started doing more than just reviewing. So far, I've done 5 cover reveals, 1 blog tour, 2 Book Blitz, 1 Unhinged Speculation, and (as of later today) 2 Book Clubs. Most of this has happened within the last couple weeks. I am now constantly signing up for various book tours and cover reveals. Here's a schedule for the upcoming events so far:

As more events trickle in, I'll hopefully make and add them to an events page on the blog. I also have received an ARC of Angel Fever by L.A. Weatherly and will be reviewing that ASAP!

Fun Stuff:
Here's the fun stuff! Below I have a giveaway for:
1 copy of Darkness Before Dawn by J.A. London, which you can see my review of HERE.
1 signed copy of The Circle of Friends Book 1 Lori by L. Diane Wolfe, with swag. And yes, I said signed!
Various swag for The Circle of Friends series.
Enjoy!

The war is over. The humans lost. And in the shattered world that arises, the vampires are king. They rule over the remaining walled cities with an iron fist, none more terrifying than Lord Valentine. His concern is with blood and blood alone, and seeing that it is ‘donated’ on time.

It’s Dawn Montgomery’s duty to ensure the safety of her fellow humans within the city, but also to serve as Delegate to Lord Valentine. She is the conduit between the two worlds, the human and vampire, and the youngest to ever do so.

But when Lord Valentine’s son, Victor, steps into her life, everything changes. She assumes he wants her blood, like all vampires. But he’s after more: her heart.

Driven by Olympic dreams! To the outside world, Lori Anders has it all. The only child of affluent parents, she is a gifted swimmer with Olympic dreams. Armed with a winning attitude and genuine spirit, Lori appears destined for success. Yet despite her certainty in the pool, something inhibits Lori from achieving her full potential. Her focus on swimming has left little time for relationships. Lacking in confidence, Lori's light has few opportunities to shine. When an altercation with the school bullies brings her to the attention of the star quarterback, Lori finds herself in a unique position. Jason's affections renew her hope and force the shy swimmer out of her comfort zone. But, will it be enough to achieve her lifelong dream? Described as "encouragement personified", Wolfe's five-book Southern-based series portrays love and friendship overcoming all obstacles.
Posted by Isabel C at 8/12/2013 10:40:00 AM