Blog Tour: Made of Stars by Kelley York


Hello, and welcome to my stop on the blog tour for Made of Stars, hosted by Rockstar Book Tours! Check out my review of the book below, as well as an awesome giveaway and the other tour dates! 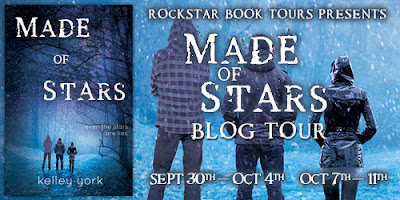 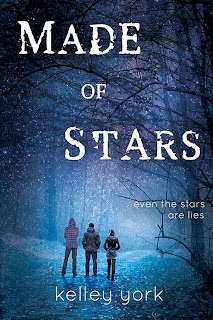 Oh dear god, this book made me cry. I ended up reading this book because I thought it would only end up being so-so and I'd have to skim it (plus, I might have put it off). That was not the case. After the first couple chapters, this book had sucked me in. I was invested in the characters and could not put it down. I seriously read all 250 pages in one afternoon. It. Was. That. Good. The writing style was different and yet like many others at the same time, which gave it an interesting blend. Their were issues that were eventually addressed in the book that I realized at the beginning, way before the characters did.

Made of Stars contains three main characters. First is Hunter. Hunter is a graduate of high school and is spending the year with his dad while trying to figure out where his life is going. His sister Ashlin is the other main character. The two of them are half-siblings and she's also a recent grad and taking a year off to figure things out and to keep close to their dad, who was shot on the job a few years earlier. I really like the two of them. They're not incredibly strong nor annoyingly weak. They aren't clairvoyant yet their not completely dense either. The two of them are much like normal kids, save their family situation. I may never look up to them as role models, but the two of them are accurate and relatable. They face issues that most kids face. They have a few odd ones (their parents and the third main character to name a couple), but most kids do. Their language is much like any other persons'-fairly decent with a few indecent words thrown in. Plus, their the ultimate role models of siblings, the ones every parent hopes that theirs will be. Maybe because they're apart so much that they don't have time to fight, but these kids actually have the ability to have decent conversations and *gasp* work together! The final main character is Chance. In a word, he's broken. At first glance, Chance is the best friend every kid wants. He's fun-loving with a never-ending want for adventure. Yet there's something hiding below the surface. Chance spends more time at Hunter and Ashlin's house than his own. And as they soon learn, most of what he's told them, and they've believed, from their childhood is a lie. Chance has a horrible home life doesn't know what to do. It ticks me off to no end that he won't accept the help of those who love him, but it's what most kids do in his situation. His character is in some ways extremely strong, but in other exceptionally weak. I had the highest hopes for his character, especially as more and more came out of the closet. One thing this story does really well, a gay relationship. While I read some good ones, they often feel awkward or are skimmed over as a minor detail. In this, the main romance is between Hunter and Chance. It was exceptionally done and I couldn't not route for their happily ever after.

If you are wanting to read this story and want a perfect happily ever after, stop now. It is not. There are things left hanging and honestly, the end is heartbreaking. My best comparison would be a short story I read in sixth grade. Have any of you read The Lady or the Tiger? Well, the ending was much like that. The reading is never quite sure who did what and what will happen. I'm pretty sure (correct me if I'm wrong) that this story is a standalone. I hope to all hope that it's not, because I'd love the characters to get their happily ever after, but I doubt there will be a sequel. The end is done in such a way that just enough is left hanging to keep you wondering, but not enough so as to leave the reader without closure. An author stated, I can't remember who, a while back that an unhappy ending is not a sad ending but one without closure. This story was not a happy ending, but it wasn't unhappy either, it was sad. It was bittersweet and heartbreaking, but not a bad ending. I'm listening to Animal by Ke$ha as I write this, and I can't help but think how accurate the song is, or at least the feeling of it, not necessarily the lyrics. As the author said in the acknowledgments, this is, above all else, Chance's story. And it is. Chance is a sad, broken character who is faced with enormous difficulties. I love him as much as I hate him. This book is one that will stay with me and will cause me to be awake at all hours awash in tears. I don't know how I can't give it 4.5 stars. 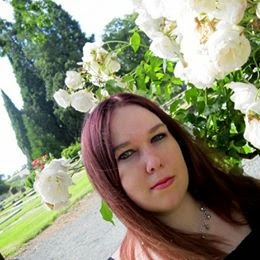 Once upon a time, Kelley York was born in central California. And it's there she she still resides with her lovely wife, step-daughter, and an abundance of cats, while fantasizing about moving to England or Ireland. She has a fascination with bells and animals, is a lover of video games, Doctor Who, manga and anime, and likes to pretend she’s a decent photographer. Her life goal is to find a real unicorn. Or at least write about them.

Kelley is a sucker for dark fiction. She loves writing twisted characters, tragic happenings, and bittersweet endings that leave you wondering and crying. Character development takes center stage in her books because the bounds of a person's character and the workings of their mind are limitless.

Her first book, HUSHED, was released by Entangled Publishing in December 2011. Her second and third books, HOLLOWED and SUICIDE WATCH, were released in 2012, and her next Entangled book, MADE OF STARS, is slated for October 1st, 2013. She is currently seeking representation.

When eighteen-year-old Hunter Jackson and his half sister, Ashlin, return to their dad’s for the first winter in years, they expect everything to be just like the warmer months they’d spent there as kids. And it is—at first. But Chance, the charismatic and adventurous boy who made their summers epic, is harboring deep secrets. Secrets that are quickly spiraling into something else entirely.

The reason they’ve never met Chance’s parents or seen his home is becoming clearer. And what the siblings used to think of as Chance's quirks—the outrageous stories, his clinginess, his dangerous impulsiveness—are now warning signs that something is seriously off.

Then Chance's mom turns up with a bullet to the head, and all eyes shift to Chance and his dad. Hunter and Ashlin know Chance is innocent...they just have to prove it. But how can they protect the boy they both love when they can’t trust a word Chance says?

You Can Find it At:
Amazon
Barnes and Noble
The Book Depository
Goodreads

1 signed copy of Made of Stars and some bookmarks US Only
1 eBook Package of Hushed, Suicide Watch, and Hollowed International