Wow, just wow. Aside from a few character points, these books could not have been better. I read Ruby Red at the prompting of a friend soon after it came out. The books are nothing but awesomesauce and let's leave it at that. No tears are allowed nor needed-which was a nice break. I'll try not to spoil anything, but if you haven't read the books, there may be minor spoilers ahead!

The main character is Gwyneth Shepard. She's a pretty cool chick. Gwen is a normal girl, except for the fact that she suddenly starts uncontrollably jumping back in time. One nice thing is that, while Gwen doesn't know the full extent of her world (and honestly, who does?), she knows about time travel and has had gifts her entire. On a side note, her gifts are never fully explained nor accepted, I demand an explanation Kerstin Gier! Anyway, Gwen thought that her cousin was the one with the time-travel gene and it turned out to be her instead. And the revelations don't stop there. Chapter after chapter, new information is piled on top of Gwen. The only problem, most of it is useless. People keep very important secrets from her. One of them, I won't say which due to spoilers, I figured out in the first book, possibly with the help of my mother, but Gwen didn't find out until Emerald Green. Dang you foreshadowing!

The other main character is Gideon. Honestly, I had some issues with him. He goes back and forth between acting ignorant, selfish, like a pig, and totally in love. It's enough to turn any girl off. He's nice looking, according to Gwen anyway, but that's one of his few appealing factors. He turns himself around and even has some really sweet moments, but dang, it takes a while to get there. My one large complaint with him though is his and Gwen's "insta-love". Along with love at first sight, which I actually only care for so-so, the two of them manage to be head-over-heals for each-other in a matter of days to a couple weeks. Christine over at PolandBananasBooks actually first pointed that aspect out here. It's a nice love story, but not particularly believable.

Ms. Gier definitely has the confusing aspect down. Time travel, like many subjects in science, makes very little sense. We don't know much about it, and so the questions are limitless. Multiple times, I've tried to think about the logistics of Gwen and Gideon's time traveling adventures, and all I get out of it is a massive headache. Seriously, time travel hurts, whether you actually travel or not. Though the time travel itself, while having it's own twist, matched facts as well. I found the story accurate and fun. It's like a cross between Doctor Who and the Hourglass trilogy and fans of either would enjoy it. So pick up the books today and I'd love to here what you think!

P.S. I promise no spoilers, but the ending of the series, in my opinion, was perfect! What did you think about what was revealed in the epilogue of Emerald Green? SPOILER Plus, if you check out my Unhinged Speculations page, I nailed it! 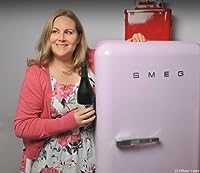 Kerstin Gier started writing women's novels in 1995 when she found herself with a fresh teaching diploma in hand but without steady work. She is best known in the United States for her Ruby Red Trilogy, and her first book, Männer und andere Katastrophen (Men and Other Disasters), was recently made into a movie starring actress and singer Heike Makatsch. Her subsequent books have enjoyed great popularity in Germany as well. Her novel Das unmoralische Sonderangebot (The Immoral Deal) won the 2005 Best German-Language Romance Novel Prize from the Association of German-Language Romance Writers (DeLiA).

Kerstin Gier, born in 1966, now works full-time as a freelance writer in a village near Bergisch Gladbach, Germany, where she lives with her husband, son, two cats, and three chickens.

Gwyneth Shepherd's sophisticated, beautiful cousin Charlotte has been prepared her entire life for traveling through time. But unexpectedly, it is Gwyneth, who in the middle of class takes a sudden spin to a different era!

Gwyneth must now unearth the mystery of why her mother would lie about her birth date to ward off suspicion about her ability, brush up on her history, and work with Gideon--the time traveler from a similarly gifted family that passes the gene through its male line, and whose presence becomes, in time, less insufferable and more essential. Together, Gwyneth and Gideon journey through time to discover who, in the 18th century and in contemporary London, they can trust.