Yes, that's right! A bonus scene not in the book that is only available on the blogs of those within the VMafia! So read on and enjoy. And don't forget to check out the giveaway at the bottom!

The Brimstone Bleed started four hours ago, give or take. I’ve traveled as far as necessary for now, put adequate distance between myself and the other Contenders. There will be plenty who travel without stopping, without making a plan.

Like the others, I don’t know anything about this race, only that I need the prize—the Cure—more than I need my own beating heart. I can still remember my mother’s words as I left our home.

“I don’t know where you think you’re going, Harper,” she said. “But you can’t just leave us like this. Not now.”

But I did leave. It’s not like I could tell her about the invitation. Or explain what would happen next. Because the truth was, I didn’t know. Two days ago, I was lounging on my bed, listening to Linkin Park and watching MTV on mute. Today, I’m here, in a jungle, fighting to save the most important person in my life.

A caw rips through the late afternoon, and the dense canopy overhead rustles. I breathe in the smell of rich, damp soil that is almost invigorating. The air is thick and damp and clings to my skin, and everywhere I look is a plant I’ve never seen before. The world is a canvas of purple vines and orange flowers and greenery that swallows the ground beneath my feet. It’s both horrific and captivating at once.

Every few seconds, I stop to swipe insects off my skin. It doesn’t bother me. I’m not the squeamish type. The only thing I’m worried about is the egg in my Brimstone Bleed issued bag. A Pandora, the device said. An animal that will help me win this competition. My heart roars in my chest when the bag against my hip stirs once again.

Now that we’re alone, I drop to my knees and remove the egg. When I see a prominent crack down the side, my entire body buzzes with anticipation. I’ve never had a pet before. Not a dog, not a cat…not even a goldfish. And now I’m supposed to travel with an animal that could potentially save my life and Lillian’s? It’s hard to absorb.

The egg cracks again, and I freeze. My hands hover over the iridescent shell, unsure of what to do. But this Pandora doesn’t need my help. It’s eager to escape its prison, eager to fulfill its destiny. I admire its tenacity already, but my stomach churns wondering what my Pandora will be like. Will it be ruthless? Endearing? Will it make it so that I don’t feel utterly alone?

The egg burst open and I fall back, a gasp escaping my throat. I glance around to ensure we are alone. And when I look back, my hands shaking, my eyes widening, I see it—

I’m a teen fiction writer with a die-hard affection for dark and humorous books. My work is represented by Sara Crowe of Harvey Klinger literary agency. I have a master’s degree in marketing, and currently live in Dallas with my husband, Ryan.

My first series started with THE COLLECTOR, and was published by Entangled Teen in April 2013. The second book in the trilogy, THE LIBERATOR, will release August 2013. My next series kicks off with FIRE & FLOOD and is being published by Scholastic, February 2014. 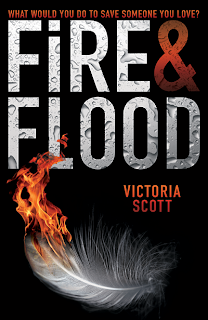 A modern day thrill ride, where a teen girl and her animal companion must participate in a breathtaking race to save her brother’s life—and her own.

Tella Holloway is losing it. Her brother is sick, and when a dozen doctors can’t determine what’s wrong, her parents decide to move to Montana for the fresh air. She’s lost her friends, her parents are driving her crazy, her brother is dying—and she’s helpless to change anything.

Until she receives mysterious instructions on how to become a Contender in the Brimstone Bleed. It’s an epic race across jungle, desert, ocean, and mountain that could win her the prize she desperately desires: the Cure for her brother’s illness. But all the Contenders are after the Cure for people they love, and there’s no guarantee that Tella (or any of them) will survive the race.

The jungle is terrifying, the clock is ticking, and Tella knows she can’t trust the allies she makes. And one big question emerges: Why have so many fallen sick in the first place?

Enter to win a signed ARC of Fire and Flood!