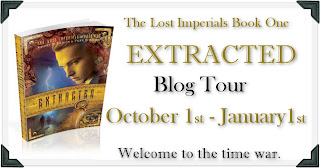 I'm so excited to be a part of the blog tour today! And, I have an interview with the authors! Also, if you scroll to the bottom, you'll find a giveaway! And keep an eye on the blog, I should have a review of the book going up in the next few days!


1. What is the most difficult part about writing?

Sherry- I think it’s a toss-up between staying focused on a project all the way to the end, and editing. Editing is hard, but at least you have a finished product to work with. But I have a dozen or so story starts on my desktop that I either lost interest in or just haven’t gotten back to yet.

Tyler- A big hurdle for me is finishing the story to completion beginning to end. I truly think getting the whole story down is a huge accomplishment. Lately I've been editing a lot. I can't say I love it, but I've found a way to get through it without completely wanting to slit my wrists and do push-ups in a bathtub.
2. What helped to inspire Extracted?

Sherry- I’m inspired by a million little things. With Extracted I had this voice (character idea) knocking around in my head for months. Then I was watching a tv special about the Romanovs and it all clicked into place.

Tyler- A little man from the past came to me one night…actually the primary inspiration came from Sherry. Once she had the idea I started creating the world around that idea.

3. What's your favorite part about writing?

Sherry- My very favorite part is when people read it and it becomes real for them. It’s like inviting people to peek inside your head (in a non-creepy way).

Tyler- The most fun I have writing is when I get to world build. Being able to create the world the characters live in comes easy for me. In fact, most of my stories I think of the world comes to me first.
4. What do you do in your spare time (when not writing)?

Sherry- What is this spare time you speak of? LOL. I read a LOT, go to movies, do nerdy things like cosplay and LARPing. Pretty much anything that strikes my fancy.
Tyler- I mountain bike and bird hunt. Oh and work full time as and orthodontist and periodontist
5. How has your life influenced your writing style?

Sherry- I think a person’s writing is always, at least a little, inspired by the people and places around them. Even in a book like this, which is 99% insane fiction, there’s still this little bit of me in there. As I change and grow, so does my writing.

Tyler- I have to say every book has some experience I've had or person I've met in my life. It's just those experiences or people have an unrecognizable twist to them.

6. Did you always know you wanted to be a writer?

Sherry- I was pretty sure I wanted to read books for money. Writing is the next big thing. But yeah, I always knew I would write, I didn’t expect to be a published author though.

Tyler- No. It wasn't until I was in my late 20's going through dental school. I was stressed out of my mind and writing was therapeutic for me.
7. Describe Extracted in five words each.

Sherry- Firefly + Doctor Who +Teens = Extracted
Tyler- Steampunk + heroic + time travel + teen= Extracted
8. What are the easiest and hardest parts of writing a book together?

Sherry- Easiest is having a built in critique partner. Hardest is staying on the same page with the story.

Tyler- I agree with Sherry. It's like having a built in beta reader. But there is a lot of compromising which Sherry and I have become experts at.

9. Who was your favorite character to write?

Sherry- I like writing all of them, but my favorite is probably Ethan. He’s very confident, I dig that about him.

Tyler- I like Nobel. He brings back all the cool MacGyver episodes with a steampunk twist.

10. What interests you most about time travel?

Sherry- I like the complexity of it. We had to be SO careful with the plot, making sure every possible tangle was addressed. It’s also very flexible because literally anything is possible.

Tyler- I like the idea of being able to go forward in time to see what life has in store for me. Not to change anything but maybe because I'm too impatient. 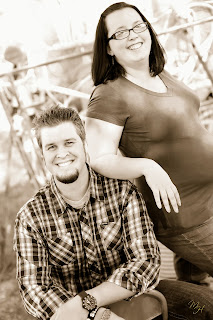 Tyler H. Jolley is a sci-fi/fantasy author and full-time orthodontist, periodontist (see: Overachiever). He divides his spare time between writing, reading, mountain biking, and camping with his family.

Sherry D. Ficklin is a full-time writer and internet radio show host with more mouth then good sense. She has a serious book addiction, but continually refuses treatment, much to her husband’s chagrin.

Tyler and Sherry met one fateful day and bonded over their love for books, science fiction, and donuts. Their first co-written novel came shortly after. Now, they still do all those other things, but also go to various steampunk conventions and events under the guise of ‘research’. They can often be found lurking on the Lost Imperials Facebook page or over on the official website. 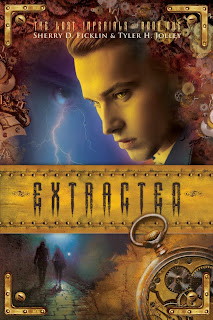 Welcome to the war. The Tesla Institute is a premier academy that trains young time travelers called Rifters. Created by Nicola Tesla, the Institute seeks special individuals who can help preserve the time stream against those who try to alter it. The Hollows is a rogue band of Rifters who tear through time with little care for the consequences. Armed with their own group of lost teens--their only desire to find Tesla and put an end to his corruption of the time stream. Torn between them are Lex and Ember, two Rifters with no memories of their life before joining the time war. When Lex's girlfriend dies during a mission, the only way he can save her is to retrieve the Dox, a piece of tech which allows Rifters to re-enter their own timeline without collapsing the time stream. But the Dox is hidden deep within the Telsa Institute, which means Lex must go into the enemy camp. It's there he meets Ember, and the past that was stolen from them both comes flooding back. Now armed with the truth of who they are, Lex and Ember must work together to save the future before the battle for time destroys them both again.

You Can Find it At:
Amazon
Amazon UK
Barnes & Noble