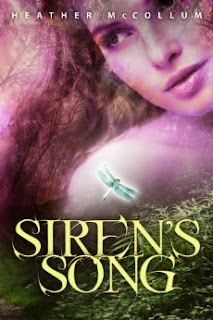 Jule Welsh can sing. She enthralls people with her bel canto voice. But it takes more than practice to reach her level of exquisite song; it takes siren's blood running through her veins. Jule is starting her senior year at Cougar Creek High when her relatively normal world begins to resemble a roller coaster flying through a carnival scare house. Her mother is diagnosed as insane and committed, a psycho-stalker is snapping pictures of her to put into his homemade Jule-shrine, her voice is suddenly putting people into comatose trances, oh and the gorgeous new guy in town, Luke Whitmore, is interested in her . . . but also wants to kill her.

#2: The light that’s captured with the shadow and white space on the picture gives the skin a soft, smooth look. The model’s face is obscured, off the page, yet she’s turned so that her left breast shows. My eyes run down her neck to a little smudge. I peer closely at it. It can’t be. It really…can’t…be.

#3: There he stands. Dark, blue-black eyes so deep I feel almost sucked toward them, like they are black holes in the universe.

#4: “Your voice.” His smile fades and a crease pinches his eyebrows briefly. “It caught me off-guard.”

My voice. Really? “Yeah, it surprises people,” I say, “but they don’t usually look like they’re going to reach down my throat and rip my voice box out.”

I watch him swallow, and he inhales as if the visual might be too much for him. I raise one eyebrow. He doesn’t look like the type who shies away from graphic violence.

#5: “I am battling hard enough to keep my temper in check,” Luke says as he glances at Matt, his grin gone. But then he looks quickly back to me. “I don’t have any remaining strength to stay away from Jule.”

#6: “You won’t hurt me.” I take a step closer so that I’m mere inches away, showing him that I trust him. I breathe him in, and I realize that I do. 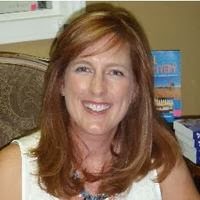 Heather McCollum is an award winning, historical paranormal romance writer. She earned her B.A. in Biology from the University of Maine, much to her English professor’s dismay. She is a member of Romance Writers of America, Heart of Carolina Romance Writers and the Ruby Slipper Sisterhood of 2009 Golden Heart Finalists.

The ancient magic and lush beauty of Great Britain entranced Ms. McCollum’s heart and imagination when she visited there years ago. The country’s history and landscape have been a backdrop for her writing ever since. She currently resides with her very own Highland hero and three spirited children in the wilds of suburbia on the mid-Atlantic coast.