Check out the cover reveal of The Romeo Club by Rebekah L Purdy! 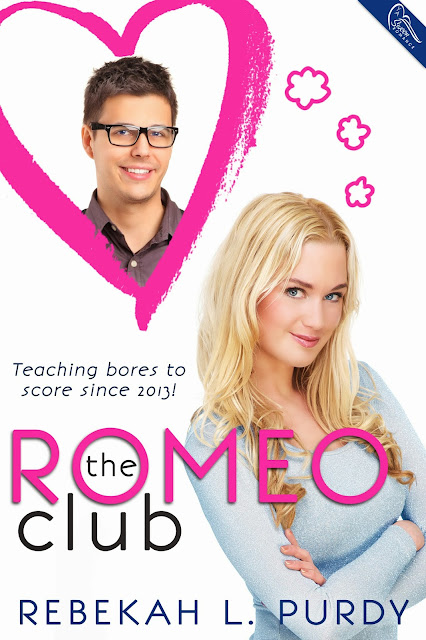 THE ROMEO CLUB is Hitch meets The Secret of My Success.

What happens when you agree to help your brother “de-nerdify” so he can catch the attention of the popular Chloe Anders, and to everyone's surprise, he actually lands her?

And what if his equally geeky friends come running with girl wish lists of their own, offering money for your services?

Well, if you’re sixteen-year-old, Delyla Denson, then you start The Romeo Club. A secret club where she’ll teach these guys how talk, act, and be cool around girls. It’s a win-win situation.

She’ll get enough money for the awesome prom dress she’s had her eye on, and the guys, well, they’ll get dates and maybe learn how to do something other than beat the next level on their video games.
There are only two problems with this plan. One, her quarterback/track star boyfriend is getting jealous of how much time she’s spending away from him and decides to try and figure out what’s going on. And two, Delyla is kind of falling for her brother’s BFF, Trey who she’s been hanging out with a lot more. And who thanks to her help, has caught the attention of the beautiful, perfect, and popular, Portia Rickard. With Portia and Trey heating up, Delyla realizes that maybe the person she’s meant to be with has been in front of her all this time.

But falling for Trey means she’ll have to take drastic measures including sabotage, with a capital S.

Rebekah Purdy grew up in Michigan, where she spent many late nights armed with a good book and a flashlight. When not hiding at her computer and getting lost in her stories, she enjoys reading, singing, soccer, swimming, football, camping, playing video games and hanging out with her kids. She loves the unexplainable like Bigfoot, the Dogman, and the Loch Ness Monster (lots of good story material)! She admits to still having all the books she bought throughout her childhood and teen years, and she may or may not have an obsession with anything chocolate…