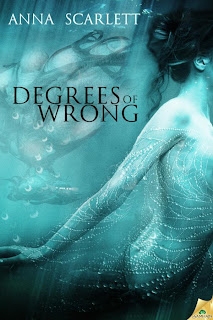 Woot woot! If you follow the blog on Facebook, then you'll know that for the past month and a half, I've been trying to get up to one hundred likes! That was finally achieved earlier this week, and, as promised, here is the giveaway for a signed Degrees of Wrong by Anna Scarlett booklet and bookmark!

All you have to do is like the Facebook page! Giveaway will go on for one week and then I'll pick a winner via Rafflecopter. Please notice, I will email the winner, and if the winner does not respond within two days, I WILL choose a new one!

Also, did you know that the author also writes books under the name Anna Banks? She does! Degrees of Wrong is still YA, but it is more mature, a warning to my younger readers.

Anna's first published work was a letter to the editor of her local newspaper complaining about stingy tippers-she was a 17 year old waitress. The letter got her a free dinner at the restaurant where she worked, and dirty looks from all the stingy tippers. Now that her mother has passed away, Anna feels it's safe to reveal that she also wrote other students' term papers for prom money in high school. Her favorite pastimes include reading, writing, drinking wine, and reading and writing while drinking wine. She can shoot a sling shot, speak with a southern accent, and take a nap in the middle of the day, any day of the week-at a moment's notice, no less. She cannot rollerblade, apply liquid eyeliner, or find her keys. Ever.

This time, the straight-and-narrow path could be the road to ruin.

Dr. Elyse Morgan’s mission: find the cure to the HTN4 virus. The compensation, courtesy of the United Nations: a lab stocked with hi-tech goodies, limitless resources and enough chocolate to make her rear look like a cellulite farm. Bonus: she gets to live.

Rescued (kidnapped) and secreted (imprisoned) on an undersea warship, Elyse adjusts to her assumed identity as a cadet with the finesse of a toeless ballerina. Her sulfuric temper and blatant insubordination capture the unwanted attention of the ship’s captain, the gorgeous, infuriating, engagedNicoli Marek.

Elyse would rather perform her own autopsy than become the other woman, but Nicoli—who’s as full of himself as he is of secrets—regards his impending marriage as a mere political transaction. And Elyse as fair game.

As Elyse’s suspicions about the UN’s true agenda mount along with her attraction to the relentless, chronically shirtless captain, she must choose between the murky path to everything she’s ever wanted, or the squeaky-clean path of self-sacrifice—which could mean taking the secrets of the virus with her to the grave.

Warning: Features a strong, chocolate-loving heroine who takes no prisoners on the way to saving the world from an epidemic and winning a captain’s heart.