On the Fence by Kasie West 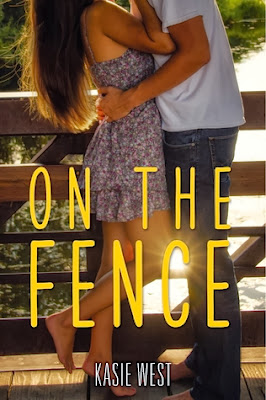 Let me say this now, I LOVE Kasie West! I got an ARC of this from The Regulator Bookshop, and loved every page of it! It comes out in July and let me tell you, you want a copy! I was even lucky enough to get to meet Kasie on the Lovestruck tour! She is an amazing woman and was a joy to talk to! This is a companion novel to The Distance Between Us, but you don't need to read one to read the other.

The main character is named Charlie. She is confident, sporty, and a pretty cool chick. According to Charlie, she is a tomboy who doesn't know how to be a girl. After getting into a bit of trouble, her dad makes her get a job. Charlie ends up in a workplace that she didn't expect to like, but ends up enjoying anyways. Over the course of the book, Charlie makes new friends, finds herself, realizes that she doesn't need to change for anybody, and that true love might have been in front of her the whole time. She's a spunky protagonist who you're going to love!

After reading awesomeness that is The Distance Between Us, I was ecstatic when I got this ARC. I gobbled it up and loved every word. Plus, there's a squealy moment towards the beginning that readers of The Distance Between Us will love! The plot was fast paced and fun. I loved the characters, and like how Charlie's protective older brothers are portrayed. I feel that the defining point in many of Kasie West's novels is the characters learning that they aren't a stereotype, that they don't really exist. It's a journey that all teens go through, which makes this incredibly relatable. Make sure to pick up this book when it comes out in July and I am hungering for whatever Kasie writes next! A definite five stars!

P.S. Be on the lookout for a giveaway of Pivot Point by Kasie West coming soon!

I love to write--too much. It's a sickness really. My debut novel, PIVOT POINT, is out now with HarperTeen. (And will be followed by its sequel, Split Second on February 11, 2014.)

THE DISTANCE BETWEEN US, my contemporary YA novel, is also available for purchase! (HarperTeen).

My agent is the talented, funny, and sometimes crazy, Michelle Wolfson.

For sixteen-year-old Charlotte Reynolds, aka Charlie, being raised by a single dad and three older brothers has its perks. She can out-run, out-score, and outwit every boy she knows--including her long-time neighbor, and honorary fourth brother, Braden.

But when it comes to being a girl, Charlie doesn't know the first thing about anything. So when she starts working at a chi-chi boutique to pay off a speeding ticket, she finds herself in a strange new world of makeup, lacy skirts, and bedazzlers. Even stranger, she's spending time with a boy who has never seen her tear it up in a pick-up game.

To cope with the stress of faking her way through this new reality, Charlie seeks late night refuge in her backyard, talking out her problems with Braden by the fence that separates them. But their Fence Chats can't solve Charlie's biggest problem: she's falling for Braden. Hard. She knows what it means to go for the win, but if spilling her secret means losing him for good, the stakes just got too high.