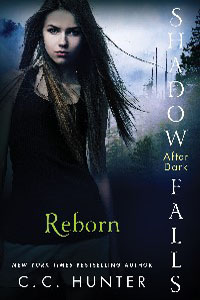 My only problem with this book was that Kylie wasn't the narrator. As much as I love Della, Kylie is Kylie. I don't know if it's that I relate to her better or that I'm simply more used to her character. While I understand that this series is about Della and will therefore be from her point of view, I'm crossing my fingers and toes for a novella or two from Kylie's POV that *hopefully* has sexy scenes between her and Lucas! :) Oh, also, my one other complaint is that the male protagonist is named Steve. Who names their kid Steve? I was thinking of Blues Clues every time his name popped up.

That said, Della is pretty kick butt. She rocks her roll, but at the same time, has insecurities like everyone else. Della really starts to realize that her friends really do have her back. She starts to finally trust people and let them in during Reborn. Shocking secrets are revealed, about both Della's family and something... else. Meanwhile, Della has to deal with one of her greatest fears, ghosts. It's really cool seeing Della slowly overcome that fear and face it head on.

A side note, Burnett, one of the lead characters who serves as guardian of the camp, can be a real poo poo head. I mean, I like him, most of the time, but I wanted to smack him in the face multiple times in this book. Also, Holiday, the faery who runs Shadow Falls, continues to be awesome. Kylie is all kinds of kick butt, and Miranda's pinkie finger does the talking for her.

I always get worried about spin-off books, but Reborn did not disappoint. Whatever expectations you have, unless that Della will suddenly turn into Kylie, will be met. There is action, major romance, and lots of fun times, mixed in with regular teen issues, such as classes, friendship, family, and boys. Reborn, like C.C.'s other books, really shows friendship and how wonderful it can be. The novel is really fun and I finished it in record time. If you have not already, read the Shadow Falls series, and read Reborn when it comes out in May!

Enter Shadow Falls: After Dark and meet a vampire named Della, who’s about to discover what her own story is meant to be. . . .

Della had the perfect life—the family, a boyfriend, and a bright future—until she was turned, and abandoned by everyone she loves. She takes refuge at Shadow Falls, a camp for teens with paranormal powers. It’s where she and her best friends, Kylie and Miranda, heal their heartbreak with laughter, and where Della is training to be a paranormal investigator—and she refuses to be distracted. That means there’s no time for romance with Steve, a gorgeous shapeshifter whose kisses melt her heart.

When a new vampire named Chase shows up at camp, Della’s world is thrown into even more chaos. Arrogant and annoyingly sexy, Chase is a mystery . . . and the only mystery Della likes is one she can solve. She can’t solve Chase, at least not while she’s dealing with ghostly hauntings, vampire gangs and a web of family secrets.

Can she prove herself as an investigator and keep her life—and her heart—intact?