The Perfectionists by Sara Shepard Review 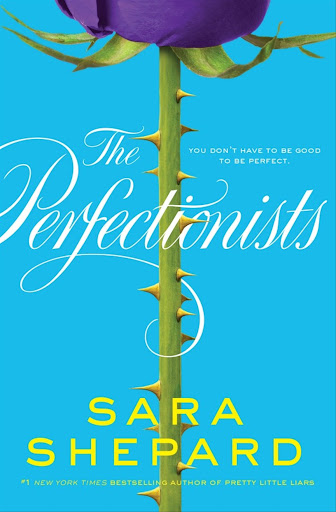 Bear with me on this review, it’s my first ever. You know, excluding little two sentence things on GoodReads.

A little about me before we start:

I’m Kate. Hi. I like to read and write and sail and sew and play my viola. I’m @becauseofpercyjackson on instagram, so come check out my account if you’re a fellow PJO/HoO lover ;). Anyways, I’ll be reviewing stuff on here too, and although I’m no experienced blogger like Isabel (two years! Wow!) I’m really excited to start and get involved in all this stuff. So yeah, hi!

ARC supplied by The Regulator Bookstore

Along with this being my first review ever, this was the first ARC I’ve ever read. So that’s unbelievably cool.

Okay, about the book. It’s the first in a new two-book series by the author of Pretty Little Liars. Two books is a definite relief, as PLL is going on it’s 16th book and is to the point where I JUST WANT IT TO END. Just like PLL, it’s a murder mystery, told from the point of view of girls trying to figure out who did the crime, of course while trying not to be suspected themselves. Because they didn’t do it… right?

Each girl comes from very different family lives, and each has their own host of problems in their lives. Mackenzie was an ok character, but I feel like she was the weakest out of all of them. I feel like the author just added her in so there wouldn’t be the same amount of girls as in Pretty Little Liars. Caitlin was the most relatable, with her rethinking her life and wondering why soccer meant so much to her and dealing with her little brother’s suicide. She’s also had the greatest motive against Nolan. Ava was interesting to read from, but she’s kind of slow on the uptake with some things *cough* don’t do that you’re stupid *cough*. Julie was very interesting, as you don’t find out fully about her family issues until later in the book. She also doesn’t wallow on her problems and instead tries to help others with theirs. Parker was the most mysterious, but immediately you can tell that she’s been through a lot and is having a hard time staying strong. But she can stick up for herself like nobody’s business.

The main characters were overall good, but there were SO MANY secondary characters. Each girl had their own family and friends and boyfriend and it was very hard to keep track of them all. But that’s to be expected with a mystery, I guess. There’s got to be lots of suspects.

Characters: 3.5/5 for the sheer mass of them. They were all overall good, but again, hard to keep them all straight (are half points allowed? oh well)

Plot: 4/5 it kept me interested, and now I really want to find out who did it. It’s very quick paced, and spends a good balance of time between the girls’s individual problems and the mystery as a whole.

World Building: 3/5 I feel like I get Beacon Heights as a whole, but it would be better if the author had included a little more information on the town.

Writing: 4/5 Could use some more details, but you definitely know what’s going on at all times. The dialogue doesn’t show much emotion, and I wish I could feel more of what the characters were feeling.

Overall, I’d give this book four stars. It’s not perfect, but its enthralling and I definitely want to read the conclusion. At the beginning, I felt like I was going to be in for a PLL repeat, but the story is its own, and does a good job of having the mystery vibes. Definitely read if you want a little mystery and would rather not read the never ending saga that is Pretty Little Liars. (Or if you like Pretty Little Liars and The Lying Game, read it!!!)

In Beacon Heights, Washington, five high school seniors- Mackenzie, Ava, Caitlin, Julie, and Parker- are each driven to be perfect in their own ways. They think they have nothing in common, until they discover that their rich, entitled classmate Nolan has done terrible things to all of them. As a joke, they come up with the perfect way to murder him. It’s a hypothetical murder, of course… until they wake up one morning to find that Nolan was killed, in exactly the way they planned. The thing is, they didn’t do it. Suddenly prime suspects in his murder, the girls scramble to find the real killer before their perfect lives come crushing down around them.

You Can Find it At:
Goodreads
Amazon
Barnes & Noble
The Regulator

For as long as she can remember, Sara Shepard has been writing. However, when she was young she also wanted to be a soap opera star, a designer for LEGO, a filmmaker, a claymation artist, a geneticist, and a fashion magazine editor when she grew up. She and her sister have been creating joint artistic and written projects for years, except they’re pretty sure they’re the only ones who find them funny.

She got her MFA at Brooklyn College and now lives outside Philadelphia, PA with her husband and dogs. Her first adult novel is called The Visibles/ All The Things We Didn’t Say.

Sara’s bestselling young adult series, Pretty Little Liars, is loosely based on her experiences growing up on Philadelphia’s Main Line…although luckily she never had any serious stalkers. The series has also inspired the ABC Family television series of the same name.