Hello everyone, and welcome to another edition of Book Bingo, hosted by the amazing Great Imaginations! Here was the original card: 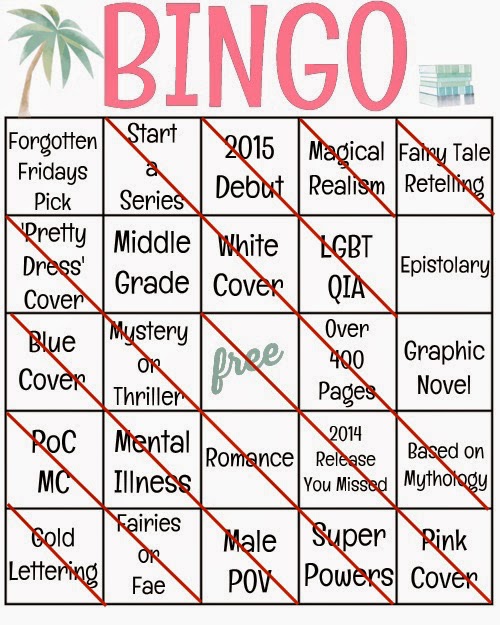 Welcome to Book Bingo Round Up: New Years Edition! Here are all the books I read!

Switched by Amanda Hocking. I also happened to finish this series, and it was AMAZING!

None of The Above by I.W. Gregorio. This was originally in my LGBTQIA section, but I moved things around a bit.

First Frost by Sarah Addison Allen. The long-awaited sequel to Garden Spells! It was not a disappointment!

This one goes to Fairest by Marissa Meyer! Not as good as the other books, but still good!

The Winner's Crime by Marie Rutkoski. I actually got this a couple days early and DEVOURED it! So good!

Frostfire by Amanda Hocking. Notice a pattern? I decided to dive in to a bunch of her books these past few months, and boy are they good!

Alex As Well by Alyssa Brugman. This book was amazing! I felt that the character was a little young for a couple of the events that occurred, but I read it in an hour and a half!

Torn by Amanda Hocking. One of the books in the Trylle series!

Deadfall by Anna Carey. I've gotten both books in this series as ARCs, and they are so good! I love the second person writing, and while this didn't feel as strong as the first, I really did enjoy it.

That goes to the Trylle trilogy bind-up. I know I'm breaking some rules, but *sticks tongue out*.

Things Fall Apart by Chinua Achebe. I did not want to read this book. I hated it. Take it away.

All The Bright Places by Jennifer Niven. This book killed me. After I finished, I am not kidding you, I went and cried for at least half and hour.

The Ruby Circle by Richelle Mead. I hadn't really been enjoying this series, but the twists and turns in this novel finished it off with a bang!

Landry Park by Bethany Hagan. This was so good! I bought it on a whim in January, and it did not disappoint. That said, TALK CHARACTERS, TALK!

The Return by Jennifer L. Armentrout. This was the first New Adult book I've read. Also the only.

Exquisite Captive by Heather Demetrios. The title is gold!

All That Burns by Ryan Graudin. I love these books so much and wish I had more of them!

Emmy & Oliver by Robin Benway. I've tried to get into some of her other books and haven't been able to, but Emmy & Oliver sucked me right in! Until the Beginning by Amy Plum is another book that works.

Dead of Winter by Kresley Cole. I just want to snuggle these books. I want more NOW!

The Fill-In Boyfriend by Kasie West. This was a combination of infuriating and adorable!