None of the Above by I.W. Gregorio 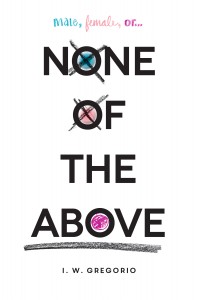 A groundbreaking story about a teenage girl who discovers she was born intersex . . . and what happens when her secret is revealed to the entire school. Incredibly compelling and sensitively told, None of the Above is a thought-provoking novel that explores what it means to be a boy, a girl, or something in between.

What if everything you knew about yourself changed in an instant?

When Kristin Lattimer is voted homecoming queen, it seems like another piece of her ideal life has fallen into place. She's a champion hurdler with a full scholarship to college and she's madly in love with her boyfriend. In fact, she's decided that she's ready to take things to the next level with him.

But Kristin's first time isn't the perfect moment she's planned--something is very wrong. A visit to the doctor reveals the truth: Kristin is intersex, which means that though she outwardly looks like a girl, she has male chromosomes, not to mention boy "parts."


Dealing with her body is difficult enough, but when her diagnosis is leaked to the whole school, Kristin's entire identity is thrown into question. As her world unravels, can she come to terms with her new self?

You Can Find it At:
The Regulator
Indiebound
Barnes & Noble
Goodreads

This is like the year of diverse books, and boy, this didn't disappoint. I got a copy of the ARC from The Regulator. None of the Above does not shy away from details or skim over things. It feels very real. Plus, the author is a surgeon, so I trust a lot of the medical facts. The book is a quick read, and on that I'm now loaning to all my friends.

Kristin is pretty cool. It's nice that she's not super confident about everything. She gives her best friend more trust than she deserves, especially after everything that happens. Kristin reacts badly, as anyone would, and really freaks out. While I can't relate to Kristin in intersex terms, I feel like I would act similarly to how she did. You know a book is good when, even if you are very different from the main character, you can still relate and empathize with them.

There is a little bit of romance in the book, which I like. It's also interesting to see people try to understand, but because of their own prejudices, etc, simply not be able to, but do still try to treat Kristin with respect.

I read this a while ago, so I don't remember much about the writing, sadly. I know I enjoyed it, and it was very to the point.

There's a very big world in this story, and after Kristin gets her diagnosis, it gets even bigger. Kristin discovers ways to cope through help on the internet, and even makes some new friends. It is a contemporary book though, and so much of the world we already know. I've never read a book about an intersex character before, but this did not disappoint!

I. W. Gregorio is a practicing surgeon by day, masked avenging YA writer by night. After getting her MD, she did her residency at Stanford, where she met the intersex patient who inspired her debut novel, None of the Above (Balzer + Bray / HarperCollins). She is a founding member of We Need Diverse Books™ and serves as its VP of Development. A recovering ice hockey player, she lives in Pennsylvania with her husband and two children.