Welcome to the release day blitz for The Notorious Pagan Jones! I'm super excited to read this book, and after this, you will be too! 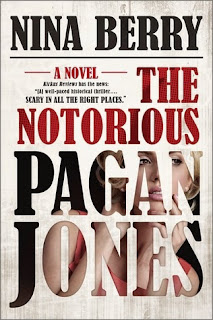 Pagan Jones went from America's sweetheart to fallen angel in one fateful night in 1960: the night a car accident killed her whole family. Pagan was behind the wheel and driving drunk. Nine months later, she's stuck in the Lighthouse Reformatory for Wayward Girls and tortured by her guilt—not to mention the sadistic Miss Edwards, who takes special delight in humiliating the once-great Pagan Jones.

But all of that is about to change. Pagan's old agent shows up with a mysterious studio executive, Devin Black, and an offer. Pagan will be released from juvenile detention if she accepts a juicy role in a comedy directed by award-winning director Bennie Wexler. The shoot starts in West Berlin in just three days. If Pagan's going to do it, she has to decide fast—and she has to agree to a court-appointed "guardian," the handsome yet infuriating Devin, who's too young, too smooth, too sophisticated to be some studio flack.

The offer's too good to be true, Berlin's in turmoil and Devin Black knows way too much about her—there's definitely something fishy going on. But if anyone can take on a divided city, a scheming guardian and the criticism of a world that once adored her, it's the notorious Pagan Jones. What could go wrong?

You Can Find it At:
Goodreads
Amazon
Barnes & Noble
Indiebound

“With a hint of Hollywood glam, mystery, and a time period unique to the YA genre, Berry treats readers to a can’t-miss story. She finds a winner in Pagan, a Marilyn Monroe-like teen actress with a tale that will appeal to younger and older fans alike.” – RT Book Reviews

“Pagan Jones, though, is nobody’s pawn. This is a well-plotted balance of Hollywood glitter and international political conspiracies during the Cold War, and the historical backdrop is meticulously set. Pagan is a smart, charismatic heroine given depth by her struggles with alcoholism.” – Booklist

Writer, crypt-explorer, bodysufer, Nina Berry is the author of THE NOTORIOUS PAGAN JONES and the OTHERKIN series. Born in Honolulu, she now writes books for teens from her secret lair in Hollywood.