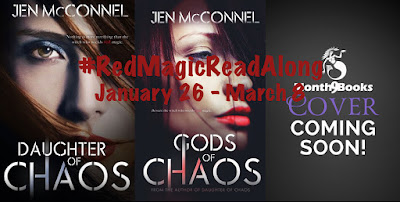 You may have heard me go on about the awesomeness that is Jen McConnel. The final book in her Red Magic series, Triumph of Chaos, comes out soon, and we decided to do a read-a-long to get everyone ready! We'll start with reading Daughter of Chaos. We will wrap up Daughter of Chaos on February 16. We'll start Gods of Chaos immediately after and wrap that up on March 8, when Triumph releases!

Throughout the read-a-long you can tweet your progress with the hashtag #RedMagicReadAlong! Make sure to let us know if you're reading it again or for the first time! Feel free to tag me (@Tween2TeenBooks) and/or Jen (@Jen_McConnel) in your tweets! The chats will start at 8:30 pm eastern time!

Here's a message from Jen to get you pumped:

With Triumph of Chaos releasing on March 8, the Red Magic trilogy will be complete. I'm alternately excited and sad to see the series end, so I asked Isabel at Tween2Teen to help me celebrate by hosting a read-along of Daughter of Chaos and Gods of Chaos. There will be prizes, trivia, Q&A, and more as we count down to the release of Triumph. I'd love it if you'd join us!

Doesn't this sound so exciting? I know I'll be participating, and I hope see you guys reading too! There will be a giveaway for an eBook set of the trilogy! I am seriously excited about this, and I hope you guys are too!

Witches must choose the path they will follow, and Darlena Agara is no exception. She’s been putting it off long enough, and in her case, ignoring it has not made it go away. In a moment of frustration, Darlena chooses to follow Red Magic, figuring she had outsmarted the powers that be, since there’s no such thing as Red Magic. But alas, Darlena’s wrong (again) and she becomes a newly declared Red Witch.

Her friends are shocked and her parents horrified by the choice Darlena has made. As a Red Witch, she now governs one third of the world’s chaos. She is the walking personification of pandemonium, turmoil, and bedlam, just as the patrons of Red Magic would have it to be.

But Darlena believes there must be more to Red Magic than chaos and destruction, and she sets out on a journey to achieve balance. Only doing so puts her at odds with the dark goddess Hecate, who simply will not allow Darlena to quit. She encourages Darlena to embrace who and what she is and to leave good magic to the good witches. If only Darlena could, life would be simple, and she would not be the Daughter of Chaos.

DAUGHTER OF CHAOS is the first in a YA paranormal trilogy.

You Can Find it At:
Indie Bound

The gods of chaos cannot be trusted.

Since battling her best friend, Darlena’s grip on Red Magic has been shaky. She heads to Scotland after the Winter Solstice in search of another Red Witch.

On a sightseeing excursion with girls from her hostel, Darlena arrives at The Vaults, a mysterious underground city beneath Edinburgh. But there is something there that make Darlena’s instincts go haywire, as she lets loose a defensive burst of Red Magic, putting everyone around her in danger.

If there was ever a time when Darlena needed the help of another Red witch, it was now. But beware the witch who wields Red Magic.

You Can Find it At:
Indie Bound
Amazon
Barnes and Noble
Kobo
iBooks

After the disaster in Europe, Darlena’s starting to get desperate. She knows the only way to
defeat Hecate and the other crazy Red Gods is by banding together with other Witches, but is it any wonder she has a hard time trusting them?

With Izzy’s support, Darlena begins making fragile strides toward repairing the mess she made,
but she just can’t catch a break. As chaos runs rampant around her, Darlena begins to think that things would be better if she’d never become a Red Witch in the first place. But there’s no way to change the past…is there?

The final book in the Red Magic series brings Darlena face to face with impossible odds, and a terrifying choice.

You Can Find it At:
Amazon
Barnes & Noble

Jen McConnel is an award winning author. She writes Young Adult and New Adult fiction, nonfiction, and poetry. When she isn’t writing, she can be found on her yoga mat, teaching, or wandering off on another adventure. She grew up in mid-Michigan, attending Western Michigan University, and now lives with her family in North Carolina. She holds a MS in Library Science from Clarion University of Pennsylvania, and she is currently working on her MFA in Children’s Literature at Hollins University.

Once upon a time, she was a middle school teacher, a librarian, and a bookseller, but those are stories for another time.