I asked Sarah how she did the world building for the novel. Here's her answer!

I love to build worlds.

I love to think up a new society and culture and pick and prod at it, wondering how they do things differently than we do things in real life. And because I write fantasy, there are often many things that come into play.

In ASSASSIN’S HEART, Lea’s world is a world of ghosts and gods. People die and turn into angry ghosts, and those ghosts in turn kill more people. So because of this, I had to sit and ponder what it means for the cultures and societies plagued by these ghosts.

What would happen if the ghosts only came out at night? That would mean cultures that were day-oriented. Which would mean people who rise early and greet the sun. And perhaps a roaring inn business because once the sun sets, people would be afraid to walk the streets to reach their homes. And if suddenly a city or country found themselves free of the ghosts, they would probably go a bit overboard in their celebrations of reclaiming the night.

And then, of course, the kingdom of Lovero has a patron god of murder, death and resurrection, which required so much brainstorming. How would their culture react to Families of assassins? Would they fear them? Worship them as disciples of their gods? And how would someone worship a disciple of their god who has also killed someone they love? There’s probably some conflict in the hearts of many of the citizens of Lovero. Is this something that comes up in their society? Most likely.

I’m lucky enough to have visited Italy when I was a teenager. So much of the setting is pulled from my own memory (if you’ve never been to Italy and you get the chance to go, do so!) But the renaissance level of technology required some research on my part. I needed to know how their kitchens functioned. How their toilets functioned. What their clothing was like. I wanted Italian-esque sounding names for places and people, so it required a lot of surname research and place-name research. And once I had a good feeling of both, it also helped me for when I wanted names of people or places to sound different, as clues that maybe these people weren’t Loveran. Or to make it clear when Lea travels outside of Lovero that those place names don’t sound as similar.

But that’s why I love worldbuilding. Because it lets me ask “what if” questions. And when I find answers, I get to ask more questions, digging deeper and deeper until I find a sturdy foundation upon which to build my story. 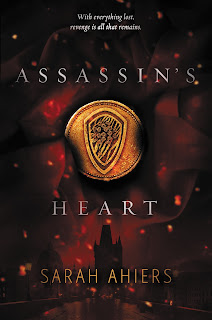 In the kingdom of Lovero, nine rival Families of assassins lawfully kill people for a price. As a highly skilled member of one of these powerful clans, seventeen-year-old Lea Saldana has always trusted in the strength of her Family. Until she awakens to find them murdered and her home in flames. The Da Vias, the Saldanas’ biggest enemy, must be responsible—and Lea should have seen it coming. But her secret relationship with the Da Vias’ son, Val, has clouded her otherwise killer instinct—and given the Da Vias more reason than ever to take her Family down.

Racked with guilt and shattered over Val’s probable betrayal, Lea sets out to even the score, with her heart set on retaliation and only one thought clear in her mind: make the Da Vias pay.

With shades of The Godfather and Romeo and Juliet, this richly imagined fantasy from debut author Sarah Ahiers is a story of love, lies, and the ultimate vengeance.

Sarah Ahiers is working towards an MFA in Writing for Children and Young Adults and lives in Minnesota with three dogs and a house full of critters. She has a collection of steampunk hats and when she’s not writing she fills her time with good games, good food, good friends and good family.

Sarah writes Young Adult and Middle Grade novels and occasionally dabbles in Picture Books. Fantasy is her favorite genre, though she sometimes can be found playing around with Horror and other things that go bump in the night.

Sarah’s debut novel, ASSASSIN’S HEART (HarperTeen, February 2nd, 2016) is a Young Adult Fantasy. In the Kingdom of Lovero, where families of assassins lawfully kill people for the right price, seventeen-year-old Oleander “Lea” Saldana sets out on a path of vengeance against the most powerful assassin family of all.

She is represented by Mollie Glick of Foundry Literary & Media.

(1) Winner will receive a finished copy and some swag (bookmarks, postcards), US Only.