Greta has always been a kick-ass character, but what made her so capable of adapting to her new environment on Mylena when other girls her age who may have found themselves trapped in a hostile world without any resources might have fallen apart under the stress?

Greta was thirteen when she ended up in this other world. It was summer vacation and she’d just had her birthday. When she started talking to me way back in the very beginning, I knew she was a Leo.

Leo's are natural born leaders, and they will let you know it because they have a tendency to be high-minded and vocal about their opinions. But they also have a savvy way of analyzing a situation and executing swift judgment with a beneficial outcome. It comes from being a leader. They are brave, intuitive, and also head-strong and willful. Beneath their dynamic persona is a generous, loving, sensitive nature that they don’t like to share. They might be a bit bossy, but this comes from a need to do good.

But what does it say about her love life?

Well, Isaac’s zodiac sign was harder to pin down because he lives under a different set of stars, of course. But given the timing of his birthday and the way he reacts to her, I pegged him for a Capricorn.

Capricorn is more conservative, hard working and traditional than Leo, and that fits Isaac’s personality for sure. Both are extremely devoted, however, especially to teach other. And while they may seem to be an unlikely couple on the surface, their love will grow as they discover similarities. Leo can be outrageous, while Capricorn has a simpler nature. Both Signs are very strong and determined, but they are open to learning from one another.

When it comes right down to it, both Greta and Isaac are strong personalities, and they’re definitely going to butt heads along the way to true love, but if they remain open and honest with one another, then they can be one hell of a power-couple! :D 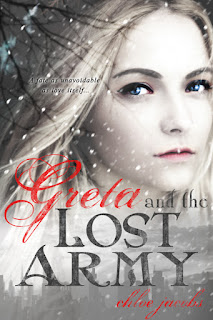 A fate as unavoidable as love itself…

After spending the last four years trapped in a place of monsters, demons, and magick, the last thing the fierce teenage bounty hunter Greta expected was to ever be back on Earth. But a rare opportunity gives her and the Goblin King Isaac the opportunity to do just that. Now she’s home. With a boy in tow. And her parents have lots of questions.

Although Greta finally has her heart’s deepest wish—to see her family again—every step she takes to reconnect with them drives her further away from Isaac. Greta and Isaac planned for her to return to Mylena and become his queen, but she’s not sure if she can go back to that harsh world, though staying on Earth means giving up the boy she loves.

But a powerful enemy refuses to let Greta escape. A demon who will stop at nothing to destroy her and everything she loves. Even if it means following her to Earth and forcing her to face a fate as unavoidable as love itself.

You Can Find it At:
Amazon
Barnes and Noble
Indigo/Chapters