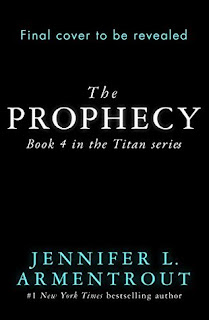 This week, I'm super excited for The Prophecy by Jennifer L. Armentrout! I've devoured the previous books, and with the cliffhanger of the last one, I've been practically salivating for this one. *Spoilers* With the pregnancy bomb of the previous book, I'm really curious how they will balance a war with being pregnant. Also, what is this kid going to be? A god? A demigod? What?!?! *End Spoilers* I'm especially excited to see more of Alex and Aiden. They are obviously my favorite characters, since they're from the initial series. I mainly just want more of this world. I also want Josie to blow up at Apollo, because he has not treated her well. Heck, he treats Alex, his super-descendant, better than Josie. Basically this whole book have me going *grabby hands*.

The end has come.

New ones will rise...

And Seth and Josie will need more than love to survive the final battle that could not only destroy them, but the world as they know it.

Book four in the Titan series.