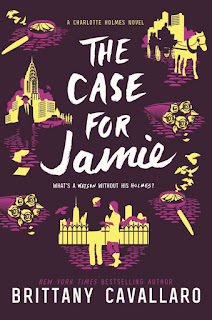 This week, I am super excited for The Case for Jamie by Brittany Cavallaro! I've really enjoyed the previous two books in this trilogy. I'm most excited to finally find out what's going on with Charlotte and Jamie, and for them to admit their feelings for each other! With it taking place a year after book two, I imagine that the sense of urgency will start off slow, but quickly ramp up once Charlotte and Jamie are back in each other's lives.

The hotly anticipated final book in the New York Times bestselling Charlotte Holmes trilogy, in which Charlotte and Jamie finally face their longtime enemy…and their true feelings for each other.

It’s been a year since the shocking death of August Moriarty, and Jamie and Charlotte haven’t spoken. Jamie is going through the motions at Sherringford, trying to finish his senior year without incident, with a nice girlfriend he can’t seem to fall for. Until strange things start happening to him. Strange things that might mean nothing at all—or that someone is after him again.

Charlotte is on the run, from Lucien Moriarty and from her own mistakes. No one has seen her since that fateful night on the lawn in Sussex. Charlotte wants it that way. She knows she isn’t safe to be around. She knows that her Watson can’t forgive her.

In this final explosive book in the Charlotte Holmes trilogy, Holmes and Watson face the ultimate test: they must unravel the case of their lives without unraveling each other.