I am super excited to be hosting Brendan Reichs on my blog today! Read on for an exclusive interview and giveaway!

1. If you could co-write a book with any other author, who would it be and why?

Ally Condie! Because I did! It’s a new middle-grade series called The Darkdeep and it releases this fall from Bloomsbury on 10/2/18. We’re tremendously excited about it. Think The Goonies meets Stranger Things. Or I guess I could write another Virals book with my Mom? Who knows!

2. If you were to spend an afternoon with your characters, what would you do?

I think we’d hike. Nemesis and Genesis are set in a beautiful little vacation town named Fire Lake, which is based off the real town of Sandpoint, Idaho. It’s surrounded by national parks, mountains, and has a killer lake, so that feels like a pretty good place to get outdoors. I’m actually answering this question while flying to Sandpoint right now, and I’m pretty freaking excited about it.

3. What projects do you have in the works?

The Darkdeep with Ally Condie, which I mentioned above, and the third book in the Project Nemesis series, which will conclude the adventures of Min, Tack, and Noah. At least, I think it will. The name of the third book and its cover will be revealed at The BookCon this summer, so stayed tuned to my social media channels.

4. What upcoming YA books are you excited for?

I just bought Thunderhead by Neal Shusterman, but haven’t had a chance to read it yet, so I can’t wait to dig into that. I’m also looking forward to finishing Children of Blood and Bone by Tomi Adeyemi, which I just started and I’m loving every page of. Everyone should read it.

5. What books did you enjoy as a child?

I loved epic fantasy, the longer the better. Tad Williams. Terry Brooks. Raymond Feist. Tolkien, of course. I lived for these long, sprawling, massive books with their own unique worlds. I still do, and some day I intend to write one of my own.

6. What advice do you have for young writers? 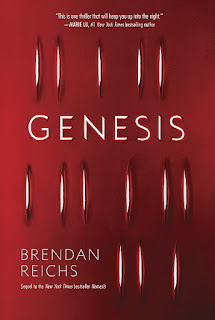 Noah Livingston knows he is destined to survive.

The 64 members of Fire Lake's sophomore class are trapped in a place where morals have no meaning, and zero rules apply. But Noah's deaths have trained him--hardened him--to lead the strongest into the future . . . whatever that may be. And at any cost.

Trapped in a violent world where brute force passes for leadership, it's tempting to lay back and let everyone else fight it out. But Min's instincts rebel against allowing others to decide who lives and who dies. She's ready to fight for what she believes in. And against whomever might stand in her way.

You Can Find it At:
The Regulator Bookshop
AMAZON

★ ”[A] heck of a page-turner . . . Fans of The Hunger Games novels and the CW series The 100 will discover much to enjoy here . . . A cracking good yarn and excellent sequel.” —Kirkus Reviews, starred review

“Nemesis was a page-turner, and Genesis has plenty of fevered action and startling surprises, especially as the book nears its conclusion . . . Fans of the first book will certainly want to read this and look forward to the trilogy’s conclusion” —Booklist

“[T]his dark sequel to Nemesis . . . . reads like a technological retelling of Lord of the Flies.” —VOYA

“Reichs knows exactly how to mix action, suspense, and characters into a breathless read. This is one thriller that will keep you up into the night.” —Marie Lu, New York Times bestselling author of Warcross

“Equal parts adventure, mystery, and heart, Genesis is a gripping, mind-blowing story that leaves you begging for more. I loved it!” —Danielle Paige, New York Timesbestselling author of Dorothy Must Die

Brendan Reichs was born and raised in Charlotte, North Carolina. He graduated from Wake Forest University in 2000 and The George Washington University School of Law in 2006. After three long years working as a litigation attorney, he abandoned the trade to write full time. He lives in Charlotte with his wife, son, daughter, and a herd of animals that tear up everything. 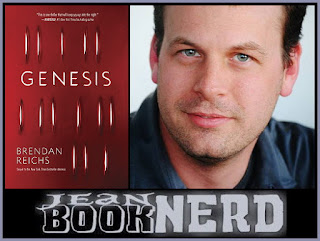 12 Winners will receive a Copy of Genesis by Brendan Reichs.