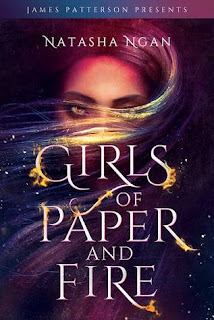 This week I am excited for Girls of Paper and Fire by Natasha Ngan! It's a fantasy set in a kingdom where every year, eight girls are taken from their homes to become consort to the king. The main character Lei is not one of those eight, but a ninth, chosen for her mysterious golden eyes. Unlike some, Lei does not want to be trapped in the palace for the rest of her life. Her life becomes even more challenging when she falls in love with one of the other consorts. I am very excited to meet Lei. The reviews I've read all paint a beautiful portrait of the world and the characters. The one thing I'm worried about is that there is sexual violence in the book. While it's an important topic, it is also a hard one to read. On the other hand, one of the biggest things I'm excited about is the queer representation in this book. Everything I've read says that it's done well and that I won't be able to put this book down. If only November could get here faster!

Each year, eight beautiful girls are chosen as Paper Girls to serve the king. It's the highest honor they could hope for...and the most cruel.

But this year, there's a ninth girl. And instead of paper, she's made of fire.

In this lush fantasy, Lei is a member of the Paper caste, the lowest and most oppressed class in Ikhara. She lives in a remote village with her father, where the decade-old trauma of watching her mother snatched by royal guards still haunts her. Now, the guards are back, and this time it's Lei they're after--the girl whose golden eyes have piqued the king's interest.

Over weeks of training in the opulent but stifling palace, Lei and eight other girls learn the skills and charm that befit being a king's consort. But Lei isn't content to watch her fate consume her. Instead, she does the unthinkable--she falls in love. Her forbidden romance becomes enmeshed with an explosive plot that threatens the very foundation of Ikhara, and Lei, still the wide-eyed country girl at heart, must decide just how far she's willing to go for justice and revenge.