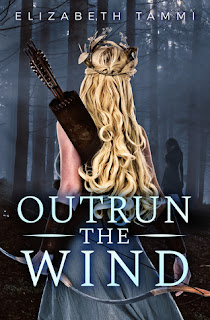 This week I'm excited for Outrun the Wind by Elizabeth Tammi. The first thing that drew me in about this book was definitely the cover. They say don't judge a book by its cover, but I am a sucker for pretty covers. As you can probably guess by my previous WoW picks. I just read the description in full for the first time, and I am suddenly even more excited for this book. I knew it was a fantasy and had to do with the Huntresses of Artemis, but that was about it. Now I know it's about a *lesbian* Huntress of Artemis who saves and proceeds to fall in love with Atalanta. Let me tell you right now, I bet this book is going to be amazing! I definitely can't wait to read it!

The Huntresses of Artemis must obey two rules: never disobey the goddess, and never fall in love. After being rescued from a harrowing life as an Oracle of Delphi, Kahina is glad to be a part of the Hunt; living among a group of female warriors gives her a chance to reclaim her strength, even while her prophetic powers linger. But when a routine mission goes awry, Kahina breaks the first rule in order to save the legendary huntress Atalanta.

To earn back Artemis’s favor, Kahina must complete a dangerous task in the kingdom of Arkadia— where the king’s daughter is revealed to be none other than Atalanta. Still reeling from her disastrous quest and her father’s insistence on marriage, Atalanta isn’t sure what to make of Kahina. As her connection to Atalanta deepens, Kahina finds herself in danger of breaking Artemis’ second rule.

She helps Atalanta devise a dangerous game to avoid marriage, and word spreads throughout Greece, attracting suitors willing to tempt fate to go up against Atalanta in a race for her hand. But when the men responsible for both the girls’ dark pasts arrive, the game turns deadly.