Excerpt Reveal: Only a Breath Apart by Katie McGarry

Would you dare to defy destiny? Are our destinies written in stone? Do we become nothing more than the self-fulfilling prophesies of other people's opinions? Or can we dare to become who we believe we were born to be? 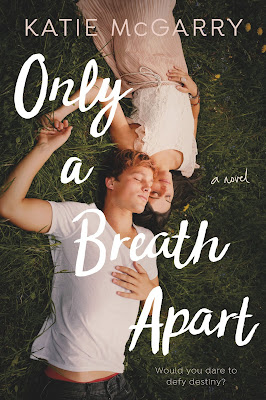 Jesse dreams of working the land that’s been in his family forever. But he’s cursed to lose everything he loves most.

Scarlett is desperate to escape her “charmed” life. But leaving a small town is easier said than done.
Despite their history of heartbreak, when Jesse sees a way they can work together to each get what they want, Scarlett can’t say no. Each midnight meeting between Jesse and Scarlett will push them to confront their secrets and their feelings for each other.

“A gorgeous, heartfelt journey of redemption and love” (Wendy Higgins), ONLY A BREATH APART is a young adult contemporary novel from critically acclaimed Katie McGarry.

“Haunting, authentic, and ultimately hopeful” (Tammara Webber), ONLY A BREATH APART will be available on all retailers on January 22, 2019! 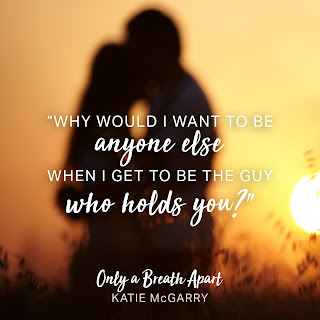 I’m defying my parents by attending a funeral. Reckless and adventurous teenage behavior, I know. Most seventeen-year-olds lie to their parents so they can go on a date with a forbidden boy or attend a party where there will be questionable behavior. Me? I’m outright lying to my dad, and it’s because Jesse Lachlin’s grandmother died.

The entire way here I’ve questioned my sanity, but I don’t know how I’d live with myself if I stayed home. Jesse Lachlin used to be my childhood best friend. We were inseparable. We had the type of friendship people strive to have, and then, a few years ago, he cut me so deeply that I still bleed. But ten-year-old me would have never abandoned a hurting Jesse. So today I’m not only honoring the memory of Jesse’s grandmother, but also the memory of our dead friendship.

On my way to the funeral, the high grass of the field swats at my legs, but I don’t mind the sting. I love walking barefoot in grass, I love the smell of the earth and I love that brief feeling of freedom open spaces can provide.

It’s the dog days of August. The type of hot that starts when the sun rises and makes you sweat through your clothes within minutes. While my skin and palms are on fire, the pads of my feet are cool against the dirt. The heat is unwelcome, but the sky is deep blue and the sun is bright, and for that, I can be grateful.

Walking out of the field, I stop short of crossing the one-lane road to slip on the flats that dangle from my fingertips. My mother would be mortified if she knew I was entering a church in a cotton daisy-print sundress. It’s not one of the dresses with stiff fabric and impossible back zippers she would have picked for me at an overpriced department store. It’s the type that’s machine-washable and breathable. The type of dress Jesse’s grandmother would have given her stamp of approval.

I can practically hear my mother heavily sigh and mumble my name, Scarlett, as if it were her personal, private curse word. Mom believes there’s a certain way to dress and behave, and I’m breaking all sorts of her rules today. Watch out, world. I’m officially rebellious.

I smile to myself because I’m the opposite of rebellious. For the last few years, I’ve followed every rule. I’m the teacher’s pet and the girl with straight A’s. I’m the poster child of perfection, and have earned every snarky ice princess comment Jesse’s friends whisper about me in the school hallways because he and I no longer speak.

There are only six cars in the parking lot of the white church, and that makes me frown. I thought more people would have wanted to attend. Jesse’s mud-covered pickup is there, and so is an unnaturally clean black Mercedes that belongs to his uncle. This ought to be interesting. Jesse and his uncle have a mutual hate for each other that runs deeper than any root of any tree.

Movement to my right and I slowly turn my head. Shivers run down my spine at the sight of Glory Gardner. Even though I’m seventeen and too old for ghost stories, I still can’t shake the ones regarding this woman. Girls would whisper over lunch boxes that Glory was a witch. As I grew older, I understood that witch meant con artist. She claims she can read palms, tarot cards and “sees” spirits from beyond the dead. All for a glorious fee.

She’s a beautiful woman—long dirty blond hair that’s untamed, even in a bun, and she has an eclectic taste in clothing. Today she wears a white peasant shirt and a flowing skirt made of material that shimmers in the sun.

Glory watches me like I watch her, with morbid curiosity. I knew her as a child, back when Jesse and I ran wild in the fields near her home, but we haven’t talked in years.

She stands under the shade of a towering weeping willow. There are lots of those trees around here. Mom says it’s because there is too much water in the ground. I say it’s because the people in this town have cried too many tears. Mom doesn’t like my answer.

I tilt my head toward the church, an unspoken question if Glory will be joining me. She shakes her head no. I’m not shocked. According to rumors, Glory will go up in flames if she enters the house of God. But who knows? Maybe I will, too.

The church is one of those picturesque, historical, one-room school buildings squeezed between a cornfield on one side and a hay field on the other. A huge steeple with a bell attempts to reach the heavens, but like anything created by a human, it falls tragically short.

The foreboding wooden door makes no noise as I open it, and I’m able to slip in without a huge, squeaking announcement. Orange light filters in through the dark stained glass windows, and its struggling beams reveal millions of dancing particles of dust.

On the altar, there’s no casket, but there is an urn. My heart dips—Suzanne is dead. I used to wish she were my grandmother, and many times, she treated me as if I belonged to her. Suzanne was the epitome of love, and the world feels colder now that she’s gone.

Choosing a spot in the back, I drop into a pew, and as I scan the church my stomach churns. How is it possible that this place is so barren?

Besides the Funeral Brigade, or the FB, as I like to refer to them, there aren’t many people here. The FB are the older group of woman who attend every funeral in our small town even if they didn’t know the person. Attending funerals isn’t my idea of fun, but who am I to judge?

The FB sit directly behind the one person the town believes to be the lone sane member of the Lachlin family, probably because he isn’t blood related—Jesse’s uncle.

On the left side of the church is Jesse. Only Jesse. And that causes a painful pang in my chest. Where are his stinking friends? The anarchists in training who follow Jesse wherever he goes? Where is the rest of the town? Yes, Suzanne was polarizing, but still, where is any respect?

Quietly, so I don’t draw attention to myself, I slip from the right set of pews to the left. Someone should be on Jesse’s side, and it’s sad it has to be me.

A door at the front of the church opens, and the pastor walks out from the addition the church build on as a small office ten years ago. I would have thought any pastor assigned to this place would be as ancient as this church. Sort of like an Indiana Jones Knights Templar scenario where he lives forever as long as he stays inside. But no, he’s the youngest pastor from the main, newer church in town. His name is Pastor Hughes, and he’s a thirty-something black man with a fit build who is just cute enough that he should be starring in a movie.

The pastor looks up, and he flinches as if startled. I peek over my shoulder then sigh. Clearly, he’s surprised to see me. Flipping fantastic.

His reaction, and the fact he won’t stop staring, causes every person to turn their heads. Lovely. I’ve had dreams like this where I enter a room and become the center of attention. Only in my dreams it’s at school, it’s my classmates and I’m naked, but still, this is disconcerting.

Eventually, the FB and Jesse’s uncle return their attention to the front, but Jesse doesn’t. He rests his arm on the back of the pew, and it’s hard to ignore that he’s made me his sole focus, but I do my best to act as if I don’t notice.

To help, I concentrate on what my mom taught me as a child—to make sure the skirt of my dress is tucked appropriately so that my thighs don’t show. I then fold my hands in my lap and straighten to a book-on-head posture. I can be the ice princess people claim me to be.

But he’s not looking away now. 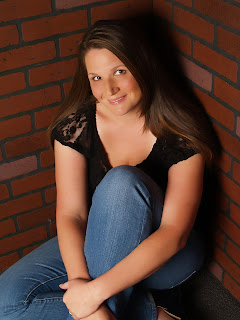 Katie is the author of full length YA novels, PUSHING THE LIMITS, DARE YOU TO, CRASH INTO YOU, TAKE ME ON,  BREAKING THE RULES, and NOWHERE BUT HERE and the e-novellas, CROSSING THE LINE and RED AT NIGHT. Her debut YA novel, PUSHING THE LIMITS was a 2012 Goodreads Choice Finalist for YA Fiction, a RT Magazine's 2012 Reviewer's Choice Awards Nominee for Young Adult Contemporary Novel, a double Rita Finalist, and a 2013 YALSA Top Ten Teen Pick. DARE YOU TO was also a Goodreads Choice Finalist for YA Fiction and won RT Magazine’s Reviewer’s Choice Best Book Award for Young Adult Contemporary fiction in 2013.