This week I am excited for The Lady Rogue by Jenn Bennett and There Will Come a Darkness by Katy Rose Pool! 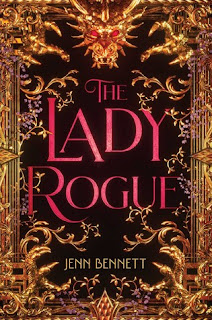 The Lady Rogue is a historical fantasy. Reading the description makes me think of Stalking Jack the Ripper, And I Darken, and The Infernal Devices. While some historical books simply take place in a previous time, I love it when books include actual historical figures or events. In this case, the book has references to Vlad the Impaler. I'm also intrigued by the cover. On first glance it's so-so, but close up the detail of the border and the metallic dragon are amazing. At first the description makes me think that the book's gonna be on the darker side (closer to And I Darken), but apparently the book does a good job mixing levity with dark gothic to make a really fun book. I can't wait to read it!

The Last Magician meets A Gentleman’s Guide to Vice and Virtue in this thrilling tale filled with magic and set in the mysterious Carpathian Mountains where a girl must hunt down Vlad the Impaler’s cursed ring in order to save her father.

Traveling with her treasure-hunting father has always been a dream for Theodora. She’s read every book in his library, has an impressive knowledge of the world’s most sought-after relics, and has all the ambition in the world. What she doesn’t have is her father’s permission. That honor goes to her father’s nineteen-year-old protégé—and once-upon-a-time love of Theodora’s life—Huck Gallagher, while Theodora is left to sit alone in her hotel in Istanbul.

Until Huck arrives from an expedition without her father and enlists Theodora’s help in rescuing him. Armed with her father’s travel journal, the reluctant duo learns that her father had been digging up information on a legendary and magical ring that once belonged to Vlad the Impaler—more widely known as Dracula—and that it just might be the key to finding him.

Journeying into Romania, Theodora and Huck embark on a captivating adventure through Gothic villages and dark castles in the misty Carpathian Mountains to recover the notorious ring. But they aren’t the only ones who are searching for it. A secretive and dangerous occult society with a powerful link to Vlad the Impaler himself is hunting for it, too. And they will go to any lengths—including murder—to possess it. 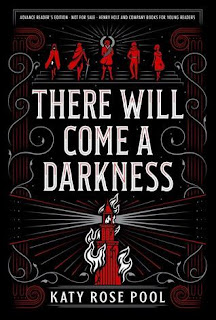 At first I wasn't sure if I wanted to read There Will Come a Darkness or not. But I've seen a handful of glowing reviews online and in general people have been excited for the book, so I took a second look. The book looks similar to Wicked Saints, which I absolutely loved, so I'm definitely intrigued now. I love stories dealing with prophecies and 'chosen ones', so this is right up my alley. The cover also has a cool lighthouse that's on fire, which makes me wonder if/how it plays into the story.

he Age of Darkness approaches.
Five lives stand in its way.
Who will stop it... or unleash it?

For generations, the Seven Prophets guided humanity. Using their visions of the future, they ended wars and united nations―until the day, one hundred years ago, when the Prophets disappeared.

All they left behind was one final, secret prophecy, foretelling an Age of Darkness and the birth of a new Prophet who could be the world’s salvation . . . or the cause of its destruction. As chaos takes hold, five souls are set on a collision course:

A prince exiled from his kingdom.
A ruthless killer known as the Pale Hand.
A once-faithful leader torn between his duty and his heart.
A reckless gambler with the power to find anything or anyone.
And a dying girl on the verge of giving up.

One of them―or all of them―could break the world. Will they be savior or destroyer?