This week I am excited for Crown of Oblivious by Julie Eshbaugh and The Bone Houses by Emily Lloyd-Jones! 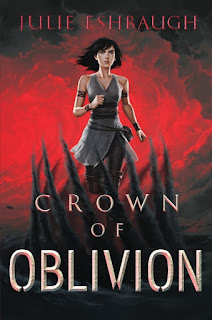 I'm actually talking about Crown of Oblivion a little earlier than I initially intended to, but I'm doing it so that my post can coincide with some cool Street Team activities. As you can tell by the sidebar, I am a proud #RacerofOblivion! The main character Astrid is in a unique position in Crown of Oblivion. While she's not royal, she is royal adjacent. She is a surrogate for the princess, which means she receives punishment whenever the princess acts out. This initial premise reminds me of a sci-fi book that came out last year. Astrid is part of the lowest caste in this society. She decides to participate in Race of Oblivion to gain three things: her freedom, citizenship, and healthcare for her family. The book seems to have some ties to current day issues, which will be interesting to see. The book looks awesome and I can't wait to dig into the ARC waiting for me!

strid is the surrogate for Princess Renya, which means she bears the physical punishment if Renya steps out of line. Astrid has no choice—she and her family are Outsiders, the lower class of people without magic and without citizenship.

But there is a way out of this life—competing in the deadly Race of Oblivion. To enter the race, an Outsider is administered the drug Oblivion, which wipes their memory clear of their past as they enter a new world with nothing to help them but a slip of paper bearing their name and the first clue. It’s not as simple as solving a puzzle, however—for a majority of the contestants, the race ends in death. But winning would mean not only freedom for Astrid, but citizenship and health care for her entire family. With a dying father to think of, Astrid is desperate to prevail.

From the beginning, the race is filled with twists and turns. One of them is Darius, a fellow racer Astrid meets but isn’t sure she can trust. Though they team up in the race, as Astrid’s memories begin to resurface, she remembers just who he was to her—a scorned foe who may want revenge. Astrid also starts to notice she has powers no Outsider should—which could help her win the race, but also make her a target if anyone finds out. With stakes that couldn’t be higher, Astrid must decide what is more important: risking her life to remember the mysteries of the past, or playing a cutthroat game in order to win her—and her family’s—freedom. 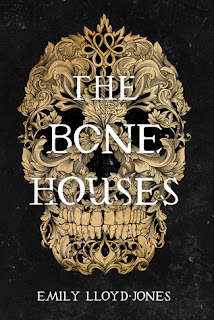 The Bone Houses is a YA fantasy/horror novel, which is an interesting combination. I feel like the combo isn't seen too often, so it's always exciting when one pops up. The main character Run is a gravedigger, which means I'm automatically intrigued. She is working in a village that is near the former home of the fae. Whether the fae actually make an appearance in the book is unclear. But the most interesting bit is that while Ryn is digging graves, sometimes the dead come back. When a visiting mapmaker arrives, the situation becomes more dangerous. This book looks really interesting, and I can't wait to read it!

Seventeen-year-old Aderyn ("Ryn") only cares about two things: her family, and her family's graveyard. And right now, both are in dire straits. Since the death of their parents, Ryn and her siblings have been scraping together a meager existence as gravediggers in the remote village of Colbren, which sits at the foot of a harsh and deadly mountain range that was once home to the fae. The problem with being a gravedigger in Colbren, though, is that the dead don't always stay dead.

The risen corpses are known as "bone houses," and legend says that they're the result of a decades-old curse. When Ellis, an apprentice mapmaker with a mysterious past, arrives in town, the bone houses attack with new ferocity. What is it about Ellis that draws them near? And more importantly, how can they be stopped for good?

Together, Ellis and Ryn embark on a journey that will take them deep into the heart of the mountains, where they will have to face both the curse and the long-hidden truths about themselves.