The Merciful Crow by Margaret Owen AND Giveaway

Hello and welcome! I hope you enjoy the book and make sure to enter the giveaway at the end! 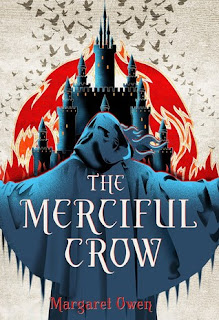 You Can Find it At:
The Regulator
Goodreads
Amazon

The Merciful Crow has been on my TBR since I first discovered it. I featured it in my Crow Edition of Waiting on Wednesday here. What got me especially excited was when Margaret Owen delved into the cool linguistics she played with for the story on Twitter. You can read the thread here. For some reason, I didn't end up reading the ARC I had until literally one day before it released, but better late than never, because I absolutely loved it!

The main character Fie was amazing. I loved her from the first few pages. I knew I was in for a treat when Fie initiated the Money Dance. The Crows are feared and hated throughout Sabor, and they have learned just how to utilize that. The description of the Money Dance is so in depth that I can imagine hearing it, nails scraping on marble and thirteen people screeching. It's not something I'd ever want to hear. When Fie then goes up to the queen herself, with a deceptively simple demand, I would've quaked in my boots if I'd been wearing any. How powerful is the line: "I'll have the teeth." If got tattoos, I'd want a tattoo of that.

Back to Fie. While I love her, I do question her taste in love interest. Personally, I don't see why Fie likes Tavin, but I support her in liking who she wants to like nonetheless. I wouldn't want to date someone who I saw as a bit of a lifelong enemy, but all the power to her for breaking norms, etc. Both boys, Tavin and Jasimir, start out pretty annoying. They don't know about the daily struggles of the Crows, specifically with the Oleander Gentry. I don't know if it was purposeful or not, but the description of the Gentry reminds me of the KKK, specifically during Jim Crow. While Tav and Jas are pretty naive at the beginning of the book, as they spend time with the Crows, they start to gain an understanding of just how hard life is outside the upper castes.

The world of The Merciful Crow is incredibly large. The map at the front of the book is expansive. Sadly, it wasn't in the ARC. I would have liked to follow the book on the map since there's so much travel. While the travel on the surface is just part of the setting, it also says a lot about the characters. Crows are expected to wander their whole lives, but in this, we see purposeful travel. With each move, the characters are chasing hope. Hope that this new destination will be better, will help create change. Fie has lost most of her hope in the world, and I don't blame her. But her travel betrays something that she tries to keep hidden. Fie has a hope for a better world, one that can only be achieved by getting two teenage boys across a continent. The fact that she does this, at times with family, at times on her own, is a testament to her character.

The Merciful Crow is the series, I believe a duology. Book two, The Faithless Hawk, comes out next July. Since I loved this book, I am super excited for the sequel! The book ends with some aspects wrapped up, but there are many larger things in the world still up in the air. I can't wait to see how the story resolves, and hopefully watch the characters get their happy endings! 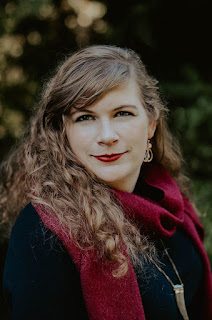 Born and raised at the end of the Oregon Trail, Margaret Owen first encountered an author in the wild in fourth grade. Roughly twenty seconds later, she decided she too would be an author, the first of many well-thought-out life decisions.

The career plan shifted frequently as Margaret spent her childhood haunting the halls of Powell’s Books. After earning her degree in Japanese, her love of espresso called her north to Seattle, where she worked in everything from thrift stores to presidential campaigns. The common thread between every job can be summed up as: lessons were learned.


Fortunately, it turned out that fourth-grade Margaret was onto something. She now spends her days wrestling disgruntled characters onto the page, and negotiating a long-term hostage situation with her two monstrous cats. (There is surprisingly little difference between the two.) In her free time, she enjoys exploring ill-advised travel destinations, and raising money for social justice nonprofits through her illustrations.

It's giveaway time! Enter to win an ARC of The Merciful Crow! This giveaway is US only due to shipping reasons. A second place winner will receive an assorted swag pack!