This week I am excited for Crier's War by Nina Varela and The Burning Shadow by Jennifer L. Armentrout! 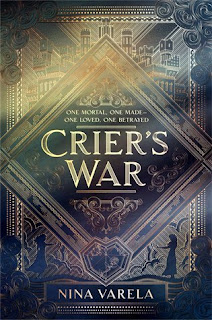 From the description and what other bloggers have said, Crier's War is a slow burn, enemies-to-lovers, f/f romance. While the book is categorized as fantasy by a lot of people, a review I read said it was more dystopian than fantasy. Of the two main characters, one is an Automae, or made, and one is human. The human, Ayla, is working in the royal palace of the Automae as a servant in attempt to avenge her family. She plans to do so by killing the Automae Crier, the daughter of the Sovereign and our other main character. Somehow, these to young women will find a way to put aside their differences and fall in love. And let me tell you, I can't wait to read that! I have heard nothing but amazing things about Crier's War, and my ARC will probably be one of my next reads!

After the War of Kinds ravaged the kingdom of Rabu, the Automae, designed to be the playthings of royals, usurped their owners’ estates and bent the human race to their will.

Now Ayla, a human servant rising in the ranks at the House of the Sovereign, dreams of avenging her family’s death…by killing the sovereign’s daughter, Lady Crier.

Crier was Made to be beautiful, flawless, and to carry on her father’s legacy. But that was before her betrothal to the enigmatic Scyre Kinok, before she discovered her father isn’t the benevolent king she once admired, and most importantly, before she met Ayla.


Now, with growing human unrest across the land, pressures from a foreign queen, and an evil new leader on the rise, Crier and Ayla find there may be only one path to love: war. 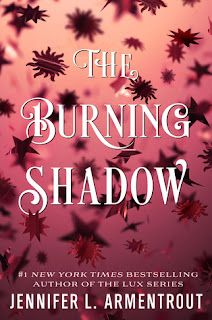 The second book I'm excited for is The Burning Shadow! It's the sequel to last week's book, The Darkest Star. The series is a spin-off of Jennifer L. Armentrouts' previous Lux series. In The Darkest Star, the main character Evie meets an Origin named Luc. Origins are children of a Lux alien and a human. At the end of book one, Evie learns that the past she knows is a lie. Her memory has been tampered with, but we don't know how or why. In The Burning Shadow, Evie is attempting to uncover the truth about her past while also dealing with ongoing alien/government shenanigans. Armentrout writes great paranormal romances, and I'm excited for this one! I can't wait to watch Evie and Luc fall in love while also possibly saving the world! Also, the book will apparently 'leave readers reeling' which is code for a major cliffhanger!

When Evelyn Dasher crossed paths with Luc, she was thrown headfirst into the world of the Lux―only to discover that she was already far more involved in their world than she ever suspected.

Because the Luxen aren’t the only ones with a hidden past. There’s a gap in Evie’s memory, lost months of her life and a lingering sense that something happened, something she can’t remember and nobody is willing to tell her. She needs to find out the truth about who she is―and who she was. But every answer she finds only brings up more questions.

Her search for the truth brings her ever closer to Luc, the Origin at the center of it all. He’s powerful, arrogant, inhumanly beautiful, extremely dangerous…and possibly in love with her. But even as Evie falls for him, she can’t help but wonder if his attraction is to her, or to the memory of a girl who no longer exists.


And all the while, a new threat looms: reports of a flu-like, fatal virus that the government insists is being spread by Luxen. A horrifying illness that changes whoever it touches, spreading panic across a country already at its breaking point.