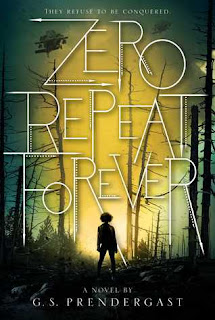 Last fall I read Zero Repeat Forever by G.S. Prendergast and absolutely loved it! Recently, I was lucky enough to get on Street Team for the series. The author kindly sent me a signed paperback to giveaway and answered some interview questions! Including some fun information about upcoming Cold Falling White. Read on for all the excitement!

While you're here, check out my review of the book here!

Thrown together in a violent, unfamiliar world, Eighth and Raven should feel only hate and fear. But when Raven is injured, and Eighth deserts his unit, their survival depends on trusting each other…

You Can Find it At:
The Regulator Bookshop

1. Zero Repeat Forever is written in two POVs. Did you have a preference writing Eighth or Raven? Was one of them much easier or harder to write?

Raven was easier to write but I loved writing Eighth's chapters. He has a very distinctive voice and the conflict within him is very concrete and specific. I found myself just writing random scenes with him (like the scene where he finds the human photographs) where I was able to express so much about not only him but the world around him.

2. The title is a reference to a poem. How did you come up with it?

My agent came up with that title! Originally I had queried the book with the title "Dandelion". Zero Repeat Forever is sooooo much better. Interestingly, the whole association with Edgar Allan Poe came about because I randomly chose the name Raven. Then I wrote the scene where Eighth gives Raven the book. Everything flowed from there.

3. What advice do you have for young and aspiring writers?

Practice your plotting skills in shorter pieces like screenplays or short stories before you try writing a novel. Read books about screenplay structure. One of the things aspiring writers struggle with is having an idea of where the story starts and roughly where they want it to go (though often not even that) but no idea how to write the path to get there. That's where plot structure comes in.

4. The book is set in the mountains of Canada. What made you decide on that setting?

Around the time I started this book I had just been on holiday in the Alberta Rockies and around Calgary so that's probably why. I grew up not far from there and the severe winters really made an impression on me. Winter is a feature of a lot of my books.

5. The romance between Raven and Eighth is unlikely and yet utterly convincing. What was your process like writing this awesome, slow-burn romance?

The romance is where this story started. I wanted to write something about a girl falling in love with someone from a group that everyone hated, that she hated. In the end the story turned out to be something a little different--less of a romance and more of a sci-fi survival story--and I kept paring back the relationship between Raven and Eighth until there was practically nothing left. But that felt right. There's is the romance you have without even knowing you're having a romance.

7. What were some of your favorite childhood books?

I loved the Narnia books and Madeleine L'Engle's Time Trilogy. I also loved Star Wars novelizations and I had a couple of books of Star Trek novelizations--really they were short stories based on the episodes of the original series--that I read over and over. I think people destined to be writers tend to be RE-readers. There are some books I read dozens of times and I think what I was doing was studying them, to see how plots worked.

8. Along with Cold Falling White, what are some upcoming YA books you're excited for?

I'm DYING to read Queen of Nothing by Holly Black. It comes out the same day as Cold Falling White so I'll be busy reading that instead of promoting my own book.

9. The description of Cold Falling White hints that Xander gets a POV in the book. What was it like adding a POV?

Xander was the easiest to write actually. Once I got into his head I began to see him differently from how Raven had seen him, which makes sense because he was hiding so much from her. But writing two POVs is hard enough. More than two is very tricky. I had to do some careful plotting and be aware of my timeline at all times.

10. Can you give us a hint as to what is to come in Cold Falling White?

Some characters who you think are dead might not be dead. You might be surprised to see some familiar faces pop up.

Enter to win a signed copy of Zero Repeat Forever! Due to shipping costs, giveaway will be US only. 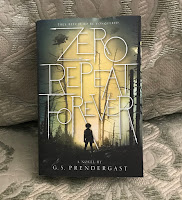