You might have noticed that I haven't posted a Waiting on Wednesday for a few weeks. I finally got a little time, and was able to type this up. Let me tell you, college is super busy! This week, I am super excited for The Beautiful by Renée Ahdieh and Fireborne by Rosaria Munda! 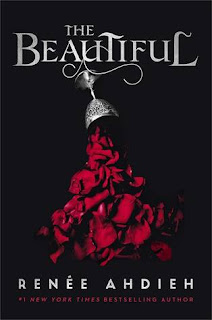 The Beautiful is the first book in the vampire comeback! Publishing got a little sick of vampires after maybe 2015, but readers (including me!) have been wanting them to come back. Well, Renée Ahdieh has answered the call! There are more vampire books coming out as well, but as far as I know, The Beautiful is the first of the wave. It's also an exciting new take on vampires! The book is set in New Orleans in the late 1800s. The city of New Orleans is ruled by vampires, and disturbing murder start occurring. It's described as a 'sultry romance', which means it's right up my alley!

In 1872, New Orleans is a city ruled by the dead. But to seventeen-year-old Celine Rousseau, New Orleans provides her a refuge after she's forced to flee her life as a dressmaker in Paris. Taken in by the sisters of the Ursuline convent along with six other girls, Celine quickly becomes enamored with the vibrant city from the music to the food to the soirées and—especially—to the danger. She soon becomes embroiled in the city's glitzy underworld, known as La Cour des Lions, after catching the eye of the group's leader, the enigmatic Sébastien Saint Germain. When the body of one of the girls from the convent is found in the lair of La Cour des Lions, Celine battles her attraction to him and suspicions about Sébastien's guilt along with the shame of her own horrible secret.

When more bodies are discovered, each crime more gruesome than the last, Celine and New Orleans become gripped by the terror of a serial killer on the loose—one Celine is sure has set her in his sights . . . and who may even be the young man who has stolen her heart. As the murders continue to go unsolved, Celine takes matters into her own hands and soon uncovers something even more shocking: an age-old feud from the darkest creatures of the underworld reveals a truth about Celine she always suspected simmered just beneath the surface. 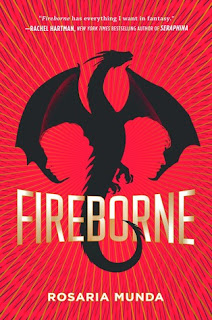 Fireborne has another of my favorite supernatural creatures, dragons! In this world, the two main characters were orphaned during a revolution. Annie was lowborn and given a chance to rise, Lee's family was part of the old aristocracy. The book seems to have a similar basic plot to other fantasies,  but the dragons are gonna be what makes it special!

Annie and Lee were just children when a brutal revolution changed their world, giving everyone—even the lowborn—a chance to test into the governing class of dragonriders.

Now they are both rising stars in the new regime, despite backgrounds that couldn’t be more different. Annie’s lowborn family was executed by dragonfire, while Lee’s aristocratic family was murdered by revolutionaries. Growing up in the same orphanage forged their friendship, and seven years of training have made them rivals for the top position in the dragonriding fleet.

But everything changes when survivors from the old regime surface, bent on reclaiming the city.

With war on the horizon and his relationship with Annie changing fast, Lee must choose to kill the only family he has left or to betray everything he’s come to believe in. And Annie must decide whether to protect the boy she loves . . . or step up to be the champion her city needs.

From debut author Rosaria Munda comes a gripping adventure that calls into question which matters most: the family you were born into, or the one you’ve chosen.