This week I'm super excited for Girls With Razor Hearts by Suzanne Young and The Electric Heir by Victoria Lee! 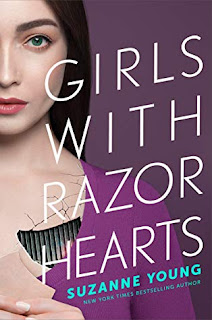 Girls With Razor Hearts is the sequel to Girls With Sharp Sticks. I absolutely loved Girls With Sharp Sticks. There's a huge twist, so be wary of spoilers ahead. After the events of the first book, Mena and company are out for revenge. I don't blame them, as some horrific things were done to them. There's the boy she likes in the first book, and he's not mentioned in the synopsis, but I imagine we'll see him again. Mena is such a great character, and I can't wait to be back in her head! I also hope to find out more secrets from this twisted world.

Make me a girl with a razor heart…

It’s been weeks since Mena and the other girls of Innovations Academy escaped their elite boarding school. Although traumatized by the violence and experimentations that occurred there, Mena quickly discovers that the outside world can be just as unwelcoming and cruel. With no one else to turn to, the girls only have each other—and the revenge-fueled desire to shut down the corporation that imprisoned them.

The girls enroll in Stoneridge Prep, a private school with suspect connections to Innovations, to identify the son of an investor and take down the corporation from the inside. But with pressure from Leandra, who revealed herself to be a double-agent, and Winston Weeks, an academy investor gone rogue, Mena wonders if she and her friends are simply trading one form of control for another. Not to mention the woman who is quite literally invading Mena’s thoughts—a woman with extreme ideas that both frighten and intrigue Mena.

And as the girls fight for freedom from their past—and freedom for the girls still at Innovations—they must also face new questions about their existence…and what it means to be girls with razor hearts. 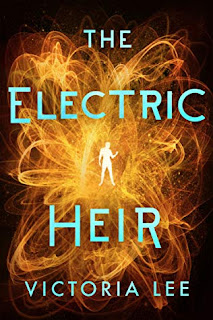 The Electric Heir is the second book in the Feverwake duology, sequel to The Fever King. One of my favorite things about this series is that it takes place in my hometown (where the author is also from). It takes place in a futuristic world where a magical disease has given some people powerful abilities. I am honestly still a little confused about the ending of The Fever King, partially because main character Noam is a little confused, so I'm hoping the beginning of this book will clear things up. I also want Noam and Dara to be able to live happily ever after on Dara's goat farm.

Six months after Noam Álvaro helped overthrow the despotic government of Carolinia, the Atlantians have gained citizenship, and Lehrer is chancellor. But despite Lehrer’s image as a progressive humanitarian leader, Noam has finally remembered the truth that Lehrer forced him to forget—that Lehrer is responsible for the deadly magic infection that ravaged Carolinia.

Now that Noam remembers the full extent of Lehrer’s crimes, he’s determined to use his influence with Lehrer to bring him down for good. If Lehrer realizes Noam has evaded his control—and that Noam is plotting against him—Noam’s dead. So he must keep playing the role of Lehrer’s protégé until he can steal enough vaccine to stop the virus.

Meanwhile Dara Shirazi returns to Carolinia, his magic stripped by the same vaccine that saved his life. But Dara’s attempts to ally himself with Noam prove that their methods for defeating Lehrer are violently misaligned. Dara fears Noam has only gotten himself more deeply entangled in Lehrer’s web. Sooner or later, playing double agent might cost Noam his life.